If you own and are using an Inspire 1 or Phantom 3 drone with DroneDeploy, you may notice a slower flight speed than usual. We’re working on resolving this issue at the moment and hope to have an update or fix to share soon.

Thank you for your patience,
Christina and the DroneDeploy team

Cheers,
Christina and the DroneDeploy team

Hello @Christina I found it slower when I called it back. On the RTH it was flying at 10m/s and during the mission at 15 m/s. If the drone made it to the end of the mission the way back was at 15 m/s. This happen one week ago. Carlos.

Thanks for stopping by the DroneDeploy forum. Let’s have you update your app sometime tomorrow afternoon and see if the issue persists. If it does, let me know.

I flew a couple of missions yesterday. One P3P drone was set to a higher overlap, and flew slower, running on 1.09. The drone flying 1.11.20 flew nice and fast, but didn’t take any pictures.

On the issue of flying slow, I would say the 1.11 drone flew at full speed. Just didn’t trigger any pictures.

Correction, the other P3P is now flying 9mph on its mission. …I’m sure the first P3P was going faster yesterday… Anyway, 1.11.2 firmware and latest ipad app.

My phantom 4 just flew at 9mph. Normally flies at 34mph. Definitely not good.

When did your issue begin and what version are all of your related apps? Also, what is your frontlap currently set at?

Keep me in the loop,
Christina

This was the first issue I’ve had. I don’t believe I had any issues before updating my DD app to it’s latest version. It’s says it’s running version 2.55.0.

Thanks for getting back to me. Can you verify when the issue began?

Today at 5:15 pm. It ran full speed to the starting point then slowed down once it started taking pictures.

Hello everyone. Remember that ir you fly at low altitude and high front overlap the drone will fly slow. Will try during weekend a new flight and let you know @Christina

What would be considered low altitude? I was flying at 400 ft.

This should be resolved now. It only affected older drones which DJI has not upgraded the firmware on their flight controllers.

Thanks @chasemgray, should we expect an app update before giving it a fly?

If you have an iOS device you can update the DroneDeploy app to 2.55.1 right now.

Thanks! I just flew a couple of missions. The low altitude was 12mph, which is expected. The higher altitude was 34!

Thanks for working your magic on the app! 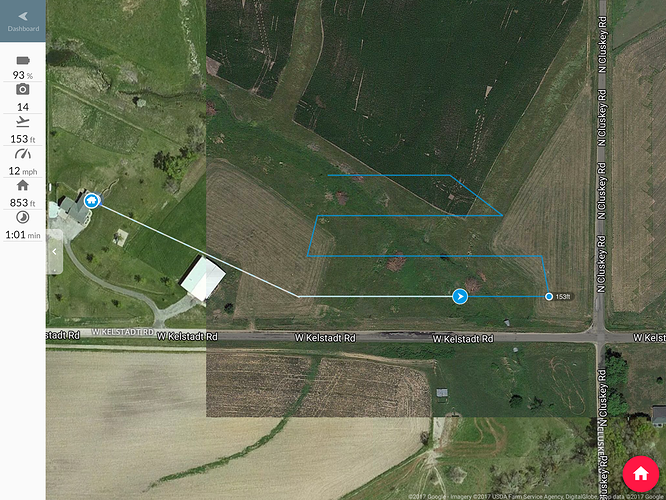