Adding New Images to a map: documentation appears to be incorrect

Hi All,
I’ve created several maps, and some large parts of them haven’t been created in the ortho, even though the area shows as being mapped, looking at where photos were taken.
I’d like to be able to reprocess the image without having to upload all 416 images again.

I found that someone had suggested adding images would cause it to be reprocessed, and suggested following the documentation here:

Adding Additional Images to a Map

There may be situations where you would like to add more images to your existing DroneDeploy map. For example: - If you've used the Point of Interest tool in DJI GO to capture additional​ images for 3D modeling. - If you have captured additional...

Is the documentation incorrect or am I going about it in the wrong way?

I just tended this question in another post. I checked out your link thinking that being a college graduate and all, I might have been able to figure something out. Here is what I figured out: 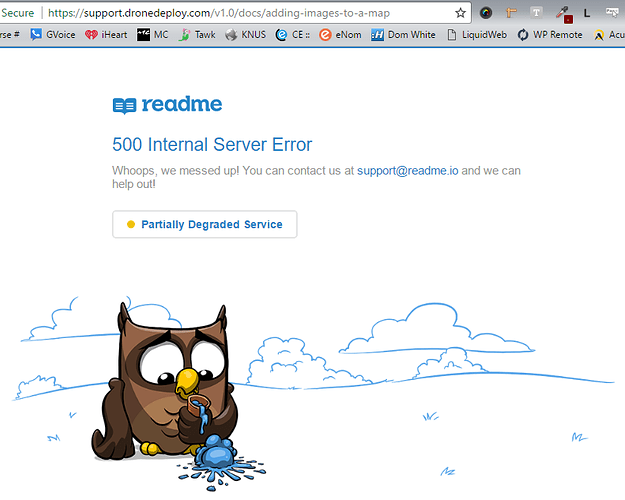 You might need to sign out and back in to activate new features in the dashboard.
Try that.

You might try a few of these to clear out possible conflicts:

Make sure you are using Chrome or Firefox as your browser.
Refresh your browser.
Clear the cache on the browser.
Sign out and sign back in to your Drone Deploy account.
Make sure you’re not signed in to Drone Deploy on another computer (two computers at the same time)
Restart your computer to clear out possible conflicts.
Restart your modem to clear out possible conflicts there.

It appears you can re-fly the area at a higher altitude and re-take images to replace blanks. Additionally you can fly another set at lower altitude. What I gather is the DD stitcher reads the geotagged data on the images and stitches them into the map at the correct location. I’ll have to give this a try.

The option is now visible in the dashboard. I was busy and didn’t make any changes to my computer or modem as suggested, but happened to look again and there it was. However, re-selecting the same images doesn’t allow one to reprocess the images, I guess one has to produce more images over the same area, which is basically the same as re-flying.