Run into this before and can’t remember if there’s a workaround but on a project with multiple maps, when you select a different map under explore the view doesn’t change to the location of that map. Happens in Chrome and Firefox.

Not sure I understand. You have multiple locations in the same map? Or switching from project to project?

I have a project that has multiple maps. When you go to Explore, the drop-down shows all the maps that were processed for that project and you can select different ones from the dropdown. It’s supposed to move the map view to that map’s location, it doesn’t. And they are all tiny maps < 1.5 acres so I can’t zoom out to see where the selected map is as it’s too tiny to see. Waiting to see what DD support says about it. 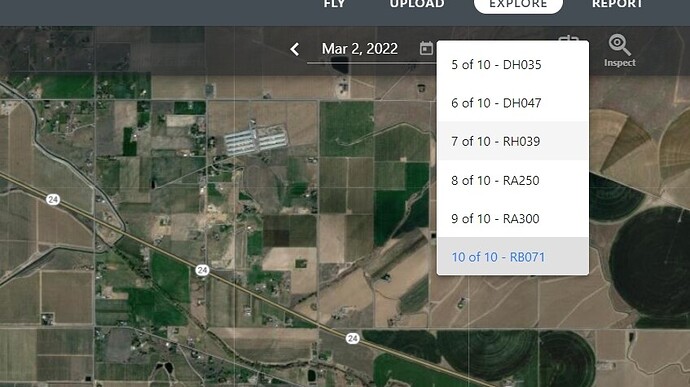 DroneDeploy says that it assumes that multiple maps within a project are all at the same location and it doesn’t support ‘hopping.’ That’s nuts. This was a project done in a half day with small sites all within a 5 mile radius. It is just pathetic I’d have to create an individual project for each tiny map that is part of one project. Guess I’ll have to do that though and just put them all in a folder. Super inefficient especially considering you can create all the multiple little missions in one project.

The workaround is to switch to 3D mode briefly and THAT will take you to the map, then switch back to 2D.

I have never seen that dropdown before. Do you have multiple locations in one mission (map)? We are use to having a map per mission (site). You can have multiple kinds of media but they are localized. We ran into the same thing as you when we had multiple sections in a subdivision project but never received that dropdown and have since gone to a map per section.