Is there a way that I can fly the same progress report flight plan at different heights and not have to have the drone come back home after every flight. I am trying to fly the same progress report at 100 ft 150 ft and 250 ft for river control. It would be nice if I can fly that all in one shot instead of landing and taking off after each height. Am I missing something to link all these flight together??

I moved your post to Feature Requests because I know this is being worked on. I need the same thing.

I would also like to have the option have to fly parallel flights in one flight.

You can ran multiple flights without landing (may be frowned upon), but I have been doing it for a while now. What we are interested in here is the ability to apply different elevations to each point. I also would like more than one point of interest (POI) and they have it in their bucket of suggestions.

Maybe even better, it would be nice to “manually” fly, set the position and take a shot and then have the system recognize that and create a flight plan. There’s nothing like setting up a plan 3 or 4 times to try to get the desired result.

This is regarding static point progress photos, but you bring up a good point. Also, you can use the PR to do 16-point specialized oblique flight to clean up models. Not just a whack hack.

I did do the radius within DD but did the additional smaller one in Litchi to get the angles of the houses in the center better. Those were the ones that messed my model.

What was the elevation difference? You can also expect a coordinate difference when launching at a different time with a different application.

A bump vote for multiple POI’s not only in the Progress Report, but in Structure Mode - maybe more importantly… The current functionality doesn’t allow for large buildings, but it would be even more beneficial to medium-sized construction sites like this 30 acres. This is a materials facility so we are interested in good 3D of the stockpiles, but I have to run multiple oblique flights to capture these three distinct areas. 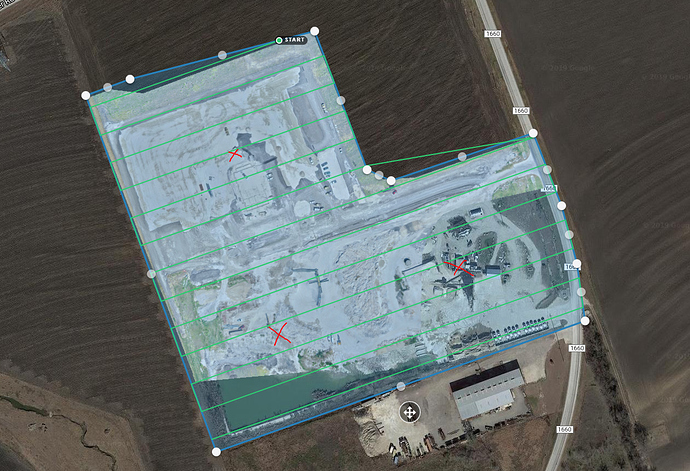