Looking for some advice to pre plan before and after flight.

We wish to review them post the project finish side by side. The attached photos show you how i manually did the flight. I used iMovie to place the spilt screen and that works great…see attached screenshots for examples.

1.The issue is flight height of the drone. I would like some ideas on how to preplan, fly a pattern. Making sure that I avoid trees and shrubs that grow during the construction process (I cannot stay at same height all the way because of obstacles).

This may be simple to many of you or maybe you could offer best practices for your flights to make this work better for our company. 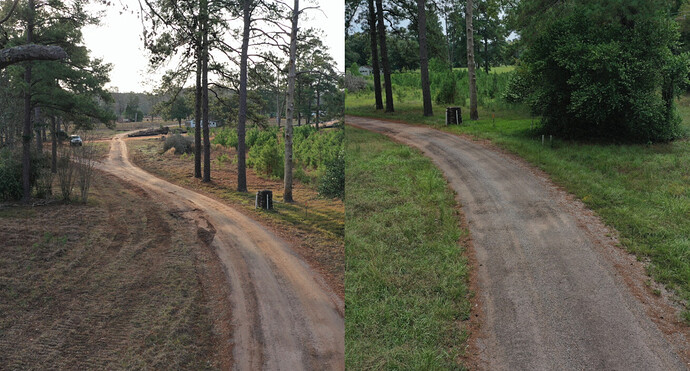 So are looking to map and/or just take aerial photos?

Just photos for before and after but I never get the exact location correct on the after - any suggestion?

I would use Litchi. DroneDeploy has Progress Photo capability, but it is limited to one Point of Interest (POI) which means that if you are at one end of a job and want to capture something close to that same edge then DD is most likely going to be pointed over it and not framed as desired. Litchi is very inexpensive and runs on both Android and iOS and they have a web browser flight planning portal. You can also create flight alignments in Google Earth and import them as KML files.

For this project as an example you could create a waypoint at one end of the road and a POI further down the road until you get the framing you want, create a second waypoint either higher or lower to get past the trees and then a third at the other end with its own POI. Continuing this process until you have all the photos you want. Then just come back at a later time and load the same flight.