Was flying a mission today and had what appears to be a bird strike. I was looking into the sun and couldn’t see what happened exactly but I heard it go into a spin and the ipad screen showed it falling out of the sky. Completely broke a motor off either from striking a bird or hitting the ground. It fell soft though. Can someone look at the flight data notifications and see if a bird strike makes sense? Again, I had a visual on the drone until it intersected the sun then I heard the drone spinning out of control.

Oh no, so sorry to hear about the loss. I’ll look at it in a minute, but it is unlikely that a bird strike would dislodge a motor so it probably was ground contact. Were all the props nearby (found)? Be right back.

The first thing I see is that there is a large variation in distance from home and altitude 45 seconds before the crash. That seems like an RTH or you had initiated something of that nature. Then there’s the event of 15 seconds where it went from 300ft to the ground. At the speed a drone would fall that seems about right, but why the large variance for the previous 30 seconds? 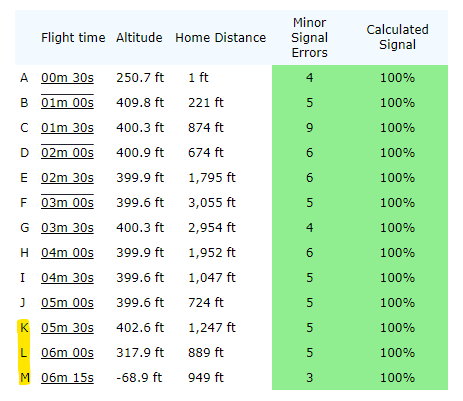 I can see many motor stress events over a 20 second period which continued so to me that kind of assures that it wasn’t a one-time strike. Maybe the motor was coming dislodge or for some reason there was some friction causing stress. There are also allot of compass errors at that point which confirm that it came down in a tailspin.

From what I see the event happened when it was returning to home. You were the only one there so it’s not fair to speculate beyond that. I am sure someone else will chime in with their own perspective.

I panicked when I realized what was happening and just hit return home from reflex. The tailspin started before it was told to return. I’m baffled as to what happened. All was well through my previous flights this morning.

I couldn’t find the missing motor or prop but the other 3 were intact. 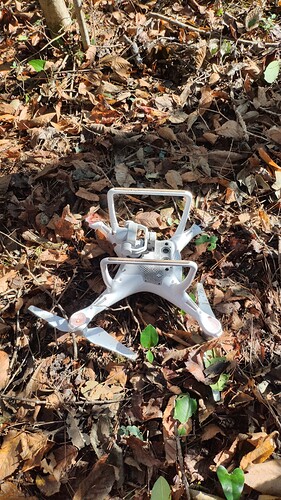 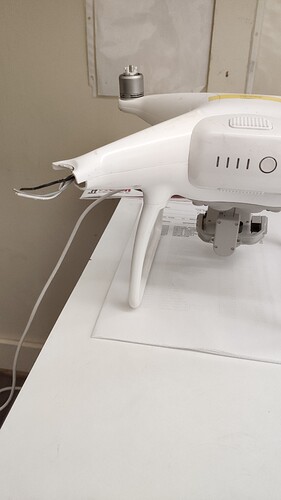 To me it almost looks like the shell cracked and the whole assembly flew off. Also seems unlikely that was the result of hitting the ground with seeing that there is very little visible damage else where. Were you mapping or in manual flight? How fast do you think it was going?

That’s haulin’ a** for mapping. I’ve never seen a good DroneDeploy mapping mission go faster than 20mph. You must have been flying high with low overlaps. If that was a bird your drone was Randy Johnson’s fastball…

I generally use DD auto mode at 400’ when mapping large acreages. Speeds are normally about 26 mph. It hauls a*s alright, and would never complete a 1500 acre project within 2 days otherwise.

I do large stands of timber or clearcuts mostly. I can do over 1000 acres in a day if everything goes well. I’ve done a 600 acre clearcut in 2 hours.

I have a theory. My M2P was attacked by a large raptor at 400 ft. The bird grabbed it with talons from the bottom. The ensuing struggle lasted lestt than 2 seconds. It stressed the motors to try to maintain course ant attitude but the bird got it past the correction point before it released. At that point it was a falling stone. Terminal velocity was sufficient to break arms but the rock it hit did a real number on it. It was a sight to behold but the price of admission was high.

You’ve had a hardware error, either a motor or ESC failure.
If you tick the Share box in Airdata and repost a link to the new Airdata report it will allow access to the actual data that would probably disprove the birdstrike hypothesis.

I don’t know how to read the data files but I have had this happen before and like you I assumed it was a bird strike. My second DJI P4 pro developed cracks in the hull after flying around 70 hours of top speed flights. The same time my first one wore out. The back 2 fuselages developed cracks approximately where the vent is. My first one had 2 detached motors. My second one developed cracks approimately where the motors detached on the first one. I have stopped flying number 2 and now at approximately the same time of use as my first 2. So far no cracks in nuber 3. I believe it is when I turn at top speeds the torque eventually takes its toll. Hope this helps.

Just curious why so much operation at full speed? Just for fun?

My second DJI P4 pro developed cracks in the hull after flying around 70 hours of top speed flights.

I fly around 29,000 acres in 5 months. I map orchards. Top speed is overstating it, but the max that DD will allow with their program. 30 to 34 on to waypoint and 27 during mapping. A phantom 4 will begin to crack around 25,000 to 29,000 acres or about 75 hours of flight. As I state before the cracks develop in rear 2 props about at the vent. The one p4 that fell had both rear fuselages detached and hanging by wires. It wasn’t until my 2nd P4 that I noticed the cracks developing and replaced it. I have close to 25,000 acres on my 3rd P4 and am looking to replace it. Most people who are shooting pictures or videos are not operating at those speeds and I don’t think stress is all that great as to crack the fuselage. They will probably out last the batteries.

The farmer who got me interested in this work had told me upfront that the p4 will wear out around 29,000 acres and he was right on.

Interesting data point, thanks. Have you considered just replacing the shell at some point before the plastic fatigue begins to be critical?

This is exactly why we have it in our program budget to purchase a new drone approximately every 6 months at pretty close to the same hour rating. We fly about 180 hours a year. Beyond the fuselage all the components related to speed control are very susceptible to heat fatigue when the drone is flown continuously for long periods. Heat over time causes everything to deteriorate, especially sensors like the IMU. You can run your drone into the ground if you want, but from a business perspective it is better to ensure availability and accuracy as well as having a spare and redundancy.

I was closing in on about 15,000 acres of use on this P4, and I run at the fastest allowed speeds as well. If that is what happened to mine as well, DJI needs to strengthen the hulls. They don’t feel very robust to begin with.

Is that link not working or is there more data I am not aware of? The only data I have private for that flight is the personal stuff.