Looking to be pointed in the right direction to get some information on the best way to do 3D modeling of structures. I am planning to begin working with a few Public Safety agencies doing some specialized work that requires 3D Modeling. I look forward to the resources, thank you in advance!

Here is some literature from DroneDeploy that can help with 3D modeling:

4 Steps for Making an Excellent 3D Model With a Drone

Two 45deg POI oblique flights. I use Litchi, but DJI Go can also do it. DD’s post-mission oblique isn’t quite there yet. The image below is from yesterday. I ran it through terrain, but have it processing in structure now. Terrain looks pretty good though.

Example: Building with the longest horizontal dimension being 100’ (50’ radius). The first flight would be a 150’ radius from the POI and 150’ high. This catches the overall subject. The second flight radius is 100’ and height is 50’. This catches the side faces and intersection with the ground in high detail. The produces a nice LAS file that we use Autodesk products to render. The image below has not been rendered. Straight DroneDeploy.

Update. Here is the 3D model from same set of images processed through structure mode. Overall the accuracy of the images on the faces of the building is better and it even tried to model the open patios and additions. The accuracy from a point cloud standpoint is far better.

If I understand your correctly, the goal is to obtain multiple pictures at different heights and distances. Then enter them into Drone Deploy and allow it to stitch them all together?

Any advice if you just don’t have the ability to go high and wide so to speak? Would it hurt to obtain the shots from a radius of about 25’?

Correct, the goal is to capture multiple angles and altitudes (Including the DD nadir shots) to give the process plenty of variables to more accurately tie points. The closer you fly to the subject the better the resolution on the texture, but too much information can cause a ribbon effect where you will see slices in the texture. Your radius is from the center point of the subject so it just needs to be large enough so that you don’t risk hitting anything. My POI in this case was just off the back of the house centered in the geometry of all three buildings. It’s hard to get a perfect center point and radius when you in the field so leave a buffer in the radius to avoid obstacles, but to also make sure you get the whole frame. Oh, and get as little of the background in the frame as possible. You definitely don’t want to see the horizon.

Thank you for the fantastic information, greatly appreciated. If things go as planned I’ll share the reason behind my request of this information. Kind of found a niche in the market and don’t want to give it up quite yet!

Do you use the drone deploy application the entire time or are you using DD for above then swapping to DJI for the lower radius shots?

I use dronedeploy for the nadir and Litchi for the obliques. You can do the obliques in DJI though. In my opinion Litchi is worth the $25.

Thanks, waiting for processing to finish. Just attempted it for the first time on my house.

Well, it finished processing and looks like mush. Total of 82 photos… I’m going to try to upload them in Structure mode and see what the outcome is…

If you don’t mind me asking, what are your camera settings and are you taking the pictures manually or setting it on burst photo or something? Super rookie at this trying to get it right. 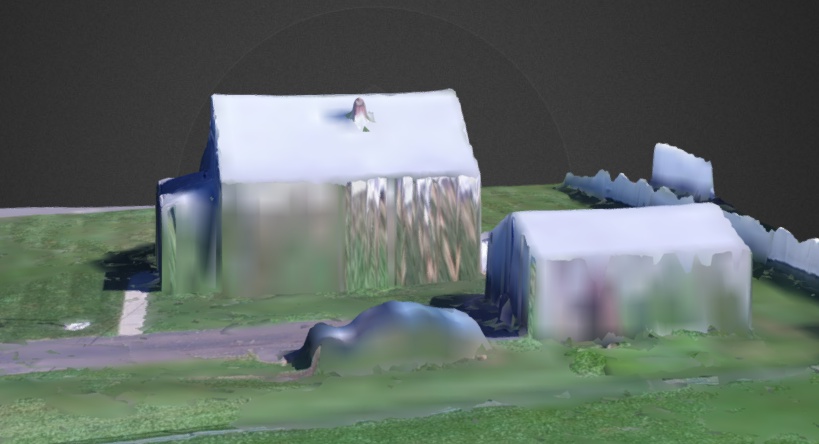 I have seen that ribbon effect on the side when I was too close for the height I was flying or had to many images. I was about 150 feet above the structure, but only 100 feet away from it because it was an oddly shaped building and hard to find the center of for the orbit to run evenly around it. Effectively that put me at a 60 angle and too close for the software to stitch properly.

Back to your questions… 82 photos seems like allot to me. I am only taking pictures every 30deg around and just 1 orbit. Basically catch each corner and 2 shots in between each corner. If your flight was just 1 orbit then your shots are between 4 and 5deg apart. I try to run one orbit at 45deg and another a little lower at 30, but be careful not to get the horizon in the background. If you run the 45deg at 200’ with a 200’ radius then run the 30deg at 100’ with a 175’ radius. Adjust your numbers as necessary to account for site conditions. Camera settings are at defaults, but I do post-process to relieve some of the shadows and balance the exposures across all pictures. You can do this in Photoshop, but I recommend ACDSee.

When you are doing 3D imaging, I’m assuming you can load images from flights on different days. I’m looking to try modeling grain elevators that have multiple feed pipes. After processing there may be areas that need more detail. Have you seen any issues with adding in additional images from later flights?

I’m thinking of using the 3D as a general discussion reference and then flying detailed images and videos using Lithci for inspection purposes.

Going to be doing a lot of test flights to see how this works. Any suggestions are welcome. Reading everything I can find on the forum about this.