What is the VERTICAL accuracy of a map?

I’m wondering if anyone has determined what the approximate average vertical accuracy is for a DEM / Topographic Map. I realize it would vary based on a lot of factors like:

Anyone have even a clue if the vertical measurements on the dem would be say within 15cm. I other words if point is identified as being 150cm off the ground, actual elevation of the point is +/- 15cm or between 135-165cm off the ground.

Without GCPs the vertical accuracy is going to be much less than your XY accuracy. The accuracy will depend on your GPS accuracy on the given day you flew the mission. Because there are so many variables that are involved with GPS resolution/accuracy this is difficult to account for. In general, you will see around a 3X error based on what you see in your XY resolution.

Sadly, there really isn’t a “typical” situation when flying a job site, every site is going to be different. This is the part of flying that is intrinsic to the flight planning phase. Being able to assess a site from the ground can be difficult. I would recommend gauging the highest obstacle in the area of interest and planning based on that. Taking the drone up and having a look at what you’re dealing with is never a bad idea.

When taking oblique images the main thing to remember is that they have a diminishing return, more is not better when taking oblique images. Also, always make sure to keep the camera angle below the horizon, images that capture the horizon can cause issues with 3D models. Some of the best models I’ve seen only had around 50 obliques. I hope this helped answer your questions. Please let me know if you have any more!

My experience with a P4P drone is different. For missions with 80% overlap and nadir-only pictures taken on an overcast day with low wind, the vertical accuracy is much better than the horizontal accuracy as reported in the RSME values for the mission. X variation is 10’ while the Z variation is reported as 1’. This should be expected since the P4P uses its Barometer and IMU to determine the relative and absolute altitude recorded in the Exif data of the still photos it takes. The relative altitude accuracy of a barometer can be suburb during a 10-20 min typical mission. These good altitude values (much better than the GPS x,y) are then used by DroneDeploy to create the 3D model and set the elevation reported by a Location click on the map. When I draw a measurement line across a 100’ length of driveway with a slope of 1/4"/foot, this slope shows in the profile plot with noise of less than 0.15" (see below). So my experience is that the relative elevation accuracy for textured hard surfaces (exposed aggregate finish on concrete in this case) over distances of probably more than 100’ can be quite good!

On the other hand, the absolute elevation accuracy without GCPs or using the Auto-calibration Technique (ACT) I described in Steep Terrain Question, is absolute garbage. I regularly see 500’ differences in elevation from missions flown on different days when the barometric pressure is 0.5" different. But I use ACT to remove all of this variation at zero added cost. The DroneDeploy report elevation for the 2D map above was 768’ before I corrected it with ACT.

Your experience may differ depending on the drone used and conditions during the mission. Again, my best results are from missions on overcast days and low winds as per DroneDeploy’s top-10 hints for best results.

I find the vertical accuracy of the combination of a P4P with DroneDeploy to be way beyond my expectations! Oh, and by the way, the above results are for missions flown at 300’ above take off point. So the 0.15" elevation noise for photos taken at 300’ is stunning!

Terry, Thanks for this update. It’s very informative. I’m looking forward to experimenting with the Inspire 1.

I have a question regarding GCP. I understand that Surveyed GCP (by a licensed Surveyor) are required for very accurate measurements. This creates an added expense but some clients may require this level of accuracy.

My questions is how to ensure that the GCPs of subsequent missions are exactly the same as the first mission? This becomes and issue when flying progressive missions, for instance weekly or monthly. Requiring a licensed surveyor each time is cost prohibitive.

When your first set of GCPs are out, is it possible to located them relative to a nearby fixed feature? Perhaps you could triangulate relative to two features? Or at the center of the GCP, put a marker in the ground or bury a piece of metal and use a metal locator when re-centering the GCP. For the next mission, you return the GCPs to these locates. I do know my Leica Disto S910 laser distance meter is accurate to much better than 1 cm over 100’s of feet so it may be possible to use something like it to locate many GCPs relative to a few fixed features.

Also you could use a combination of methods. Get close to a GCP’s location (the first survey gave you its exact coordinates) using a cellphone. This should get you within 3 m. Then use a metal locator to find the exact location of a buried metal marker (could be metal wire pushed in vertically).

Hope you find something that works for you. I am investigating the $2000 base & mobile RTK-enabled Piksi Multi GNSS Module from Swift Navigation. This may let you do your own locating of GCPs without the need of a surveyor. But it is a more complex solution and probably slower than using the combo method above.

Take a look at the Trimble Catalyst. Over here in the UK the hardware costs circa £1000. The system uses the processing power of the mobile phone to do the processing. In addition you have to buy a Trimble Licence and for 2cm accuracy the cost is about £280/month with a decreasing fee for say 10cm or 1m accuracy. Next year they are going to change the charging to a credit based scheme so that you can have accuracy for a few hours.

Setting GCPs does not require an RPLS to set points, only someone who knows how to use the equipment or someone versed enough in survey practices that knows how to pull a chain and two-tape. As far as keeping them in the same location, we use 80d nails or a piece of iron rebar. It would be best to use the nails so that they are not mistaken for monuments or property corners. Invest in some would lathe and survey flagging if you are on construction sites or in high traffic areas. I would be happy to chat. Just message me and I will give you my number.

Question for you guys with more experience on GCPs and vertical accuracy. I have a client that wants a topo of the bottom of a 35 acre pond after excavation.

Option 2-using the absolute elevation marker, throw out my five gcps, and use a laser to determine height of each gcp. Process my map and pull it into arc gis as an ortho. Create a point shapefile to get my x and y data for each gcp and add the elevations from the laser. Export as a .csv and reprocess the map with those gcps in drone deploy. This wouldn’t give me absolute accuracy to the earth but it should give me relative accuracy inside the map correct?

Any easier ideas to determine that the topo is accurate based on the absolute elevation benchmark?

Thanks for the help!

Hey @Austin_Scheib, good question! I think option 2 is a good way to go. Can you share an image of the pond? A plan layout maybe if you don’t already have an aerial. We want to make sure the GCP’s are evenly spaced and capture the top and toe of the pond.

Here is the rough layout of where I was going to place GCPs. I marked the location on GIS and measure distance to each and to the age of the map. I will use a gps to set the GCPsI also will be doing another pond south of this and will use the GCP 4 which is on the burn to tie the maps together.

All of this should give me relative accuracy inside my map for the topo correct? Without have a surveyor come out to mark my GCPs.

You already have the coordinates and are going to lay them out? I would do 3 on the top in a triangle that best covers the area and 3 on the bottom in the opposite configuration. 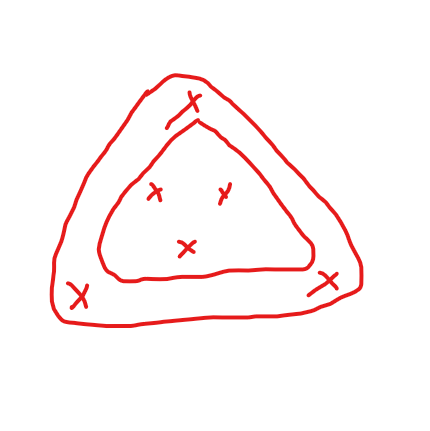 Ok I’ll have to make a extra gcp. Yes I can load my points from arc gis onto my gps and use it to layout the GCPs.

Thanks for the help. I will try to repost my work incase anyone else has the same question.

Good, you should be able to just use that file and apply the elevations you get from the laser.

If you already have the coords or are going to collect lat/lon in the field then just fake in the elevations and it will work out. No need to process without GCP’s unless you are trying to get horizontal coords.

I need the elevation across the map to be accurate seeing I’m creating a topo, so I’m not following why I would “fake in” the elevations. I will collect that data with a laser.

Yes I can load my points from arc gis onto my gps and use it to layout the GCPs.

Responding from the other thread. I can move this there or the other back if it makes sense.

From the quote above I saw GPS and thought you were going to be able to spot the GCP’s, but from the other reply I see that we are back to the original theory of having to set them, seems now just getting close to the location that you want and then gathering the XY later. That being the case then I agree that processing the map without GCP’s and then bringing the map into QGIS or ArcGIS to create the 2D points for the CSV and then adding you laser-shot elevations. When I said faking it in all I meant was that since the points were not technically shot in the way they normally are that you are building the file to seem as though it had been shot in.

Anyway I could call you?