We are in the process of refining our work processes and currently wrestling with stockpile volumetrics.
We have endeavored to employ all the best practices of which we are aware (eg 65%/75% overlaps, adding additional obliques), but have found our results problematic.
As a test, we ran two flight profiles (‘High’ - 250ft; ‘Low’ - 150ft) and then took a set of obliques from 50-100ft (for three main piles); all flown within the space of 25-30 mins. From these runs, we ran three sets of imagery, the ‘High’ and ‘Low’ imagery sets and a “Low Plus” i.e. the ‘Low’ sets plus all the obliques. Additionally for the volumetric analysis, for Pile ‘B’, I painstakingly ensured that the selected baseplanes on all three sets were as near identical as possible. ‘Best Fit’ was used for both; the whole site is on a significant grade making the use of ‘Lowest Point’ in appropriate/unusable (one example: ‘BF’ delivered 14003, while ‘LP’ delivered 22,960!). The results were as follows:

So, while it is stated that “User tests have found that when following best practices DroneDeploy’s volume measurements are accurate within 1-2% of traditional ground-based laser measurements.” I’m having difficulty reconciling that statement when there’s a spread of 5+% across three coherent imagery sets.

The results from this test would lead me to believe, because of that 5% spread, that I am compelled to run a similar three flights profile for every job in order to determine a sound average - not ideal for me or DD because of the increased processing requirements - but I can’t see an alternative. Can anyone else see one?

Does anyone know what accuracy caveats surveyors typically apply to their volumetric reports?

Did you use Ground Control Points. Require these to get any accuracy otherwise your relying on Autonomous GPS which can be 5m out.

That’s not true at all @abullock . You don’t need GCPs because for volumetrics you don’t need global accuracy.

The relative accuracy of a point cloud or volume measurement is determined by the photogrammetry software being used, the experience of the technician conducting the survey and their attention to detail in the field. By contrast, global accuracy, the precision of the x,y,z point measurements when compared to global absolute GPS measurements, is far less important. For a volume measurement, as long as you know your locations relative to other local points, you will have a very accurate final product. 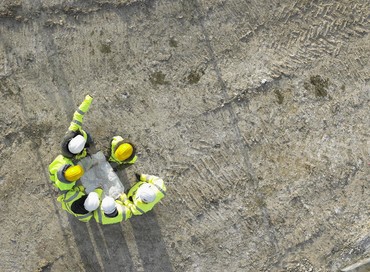 However, it’s a sad thing that DD isn’t able to deliver its claimed accuracy @Red

True if your using the same base which you said was difficult to calc. Unless you can’t physically put them out I’d use them and then just do a volume compare in your software.

Thank you for the input. But, I’m afraid neither it nor DD (as witnessed by the perpetuated claim “…drone mapping can accurately determine the volume to within 0.6% of traditional surveying methods …”) are really addressing the issue at the core of my inquiry i.e. what is (or how does one calculate) the inherent relative accuracy of an single given photogrammetry-based volumetric analysis. If I had only flown one profile I could have lived in blissful ignorance assuming subsequent DD’s analysis of my imagery produced an output “within 0.6% of traditional etc etc…”; but I didn’t, I flew 3 profiles using the same flight path but at different heights and to one of those add obliques (which I think provided the most consistently near the average) and the subsequent three analysis outputs had spreads that were about 5% on average (some spreads were 15%). So, which of the 3 sets of outputs is most likely to be the one that is “…within 0.6% etc etc”?
Based on this situation, how can I, or any other commercial user of DD’s volumetric analysis, do anything other than fly multiple profiles and average the multiple analysis outputs? UNLESS, we can provide a client with the result of a single profile WITH a realistic “margin of error” statement?

Based on this situation, how can I, or any other commercial user of DD’s volumetric analysis, do anything other than fly multiple profiles and average the multiple analysis outputs?

I’m afraid that’s what it boils down to, yeah…