Hi all, I’m new to drone mapping but have been flying drones for a few years now. I am taking on some landscape work on my property and also mapping to watch for erosion from a creek there.

Here’s a drone shot (this isn’t a map but a single shot to show the area): 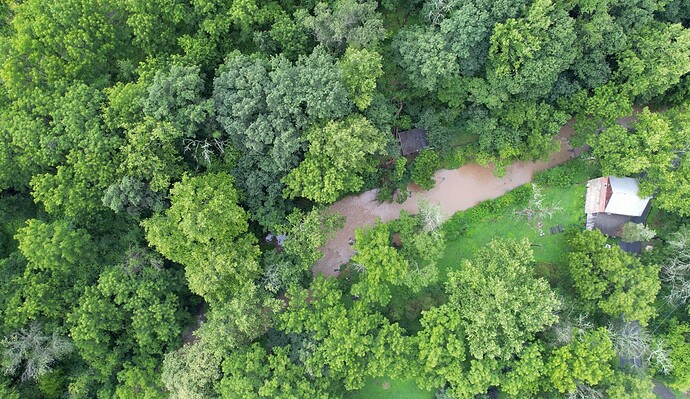 Basically, I have no probably doing a nadir map at 150 ft, but really want I want to be able to create is a 3d model I can “walk through”. I understand doing a POI oblique shot helps particularly with facade details on structures - but in this case I don’t care too much about the structures there but about be able to scroll the landscape in a 3d model.

I can do manual shots from the “inside” (the field in the middle). Or can I just fly the drone inside the tree cover and add that as a “walkthrough”?

Essentially I’m looking for help on what to do after capturing the nadir images from bird’s eye view. And also on those nadir images, is -90 degree gimbal angle best, or will something slightly less give better depth perception for the 3d model?

I plan to do all the capturing this weekend. Thanks very much in advance!

I don’t know that you will be able to create a clean walkthrough with that many trees but you could flight plan to get a decent amount out from the open areas. Just off the top of my head we would approach it something like this.

Thanks @MichaelL really appreciate your feedback. I have a few follow up questions.

Also, just to clarify, I am using Dronelink for the capture and then uploading my footage into DroneDeploy. This is just because the drone I use is an Air2s and as far as I know it’s not supported in DroneDeploy yet.

Hello! Have you ran your flights yet? I wanted to come in to add, you can get much better results by trying your best at the following:

The newer electronic shutters with the latest algorithms don’t really need to run that slow. At 150-200ft AGL an average of 10 mph has provided just as good of results as our Phantoms. I imagine you are running so much slower because of your extremely high overlaps. In our experience anything over 70% sidelaps does nothing but drive up file sizes and increase processing time. We run 80/65 and drop the frontlap as low as 75% or until the flight lines land right where we want them.

Agisoft Cloud requires you to have Metashape Pro correct?

Thanks MichaelL. Agisoft cloud does require Metashape pro. They offer a long free trial and the experience is much more engaging. Drone deploy does just fine for basic orthomosaics. The OP was interested in building a 3d model for a personal project. In any project, data is king, and I would still fly slow as heck for a low altitude oblique mission. For one because of the trees, and two for the motion blur mostly seen in these low altitude passes. At 120 plus feet you can really move and let the algorithm handle the noise.