Yesterday I was attempting to remedy the White Balance issue while mapping with a Phantom 4 in a swampy area behind my house. It was set to map for about 15:00 and at 331 ft. The drone began its mission and I again noticed the bluish hue to it, but I let the mission continue. At the 3:18 mark the drone simply began to fall with the engines and camera still running, and it tumbled down into the swamp. I was able to find it after mucking around in the swamp and it was partially submerged. The camera was mostly underwater.

Initially the SD card was corrupt but I was able to recover the files to view them. There were about 65 photos total and about a dozen of them were incomplete…only partially correct with blue bands filling the rest of the screen horizontally.

I have attached an example.

How can I do this?

The only visible damage to the drone was a snapped prop. All 4 were still attached to the drone so one did not come off mid-flight. The broken blade was within a foot of the drone when I found it so the chances of the prop hitting a bird mid-flight are slim; I would think the blade would have fallen far from the drone. Also, the engines were running as it fell so it did not lose the battery in mid-flight. But, the battery was missing. As of right now, the drone is drying out and I am not sure if it is damaged internally. If it is, I will be quite upset. I have only had this drone maybe a month and I am in the process of starting a side-business with this drone. What else could have caused it to crash? 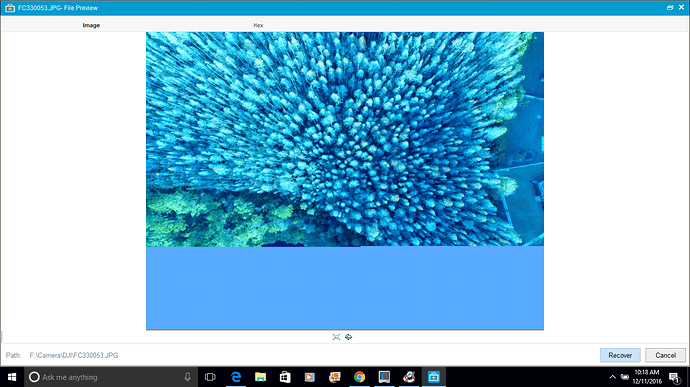 Just an update to save someone time.

I learned I could get the flight log by clicking on the finished map page once the pictures were uploaded and the mapping complete. However, I was not able to upload the pictures because the mini SD card was corrupt when I attempted to view the photos.

So, I just uploaded pictures from a previous mapping adventure in this same site, hoping that once it’s done, I could access the flight log for yesterday’s ill-fated flight.

I will then analyze using healthydrone.com and I’m hoping the crash was caused by equipment malfunction, not the DroneDeploy app. DJI has informed me that the warranty would not cover damage caused by a 3rd party app!! Understandable, but unfortunate.

If anyone has suggestions, please let me know. This my first go-around with a serious crash.

Sorry to hear about this. First off, please see this thread: Phantom 4 - White Balance If you’re getting a blue tint on your images, you may have to switch from auto to manual settings. As far as the crash, was there any indication that the drone lost its connection or did it just drop out of the sky? I would email support@dronedeploy.com on that so they can identify what might have happened. Thank you.

Thanks Kara. That’s exactly what I was doing in this test run: setting them to manual. But obviously I still did not set something correctly.

In regards to the transmission signal, there was no indication it was weak. I had visual contact with the drone and it was about 1200 ft away from me and I saw no problems on my iPad screen with weak signals.

I just received a message saying my map was complete so I will take a look at the flight log now.

OK, got the flight log and have looked it over. I see nothing unusual other than the fact it plummeted from over 300 ft up. Is there a way that I can see if an engine lost power suddenly? That’s the only thing I can think of. This is my first time looking at a report on HealtyDrones

Signal score was 100. The only thing I saw was that the GPS signal was “Good” not “excellent right” at take off and just before it fell.

I found one thing with the battery amperage that caught my attention and I took screen shots.
I can understand the AMPS going up as it flew to the east (right on the screen) since there was some wind, but nothing stronger than 8-10 mph. 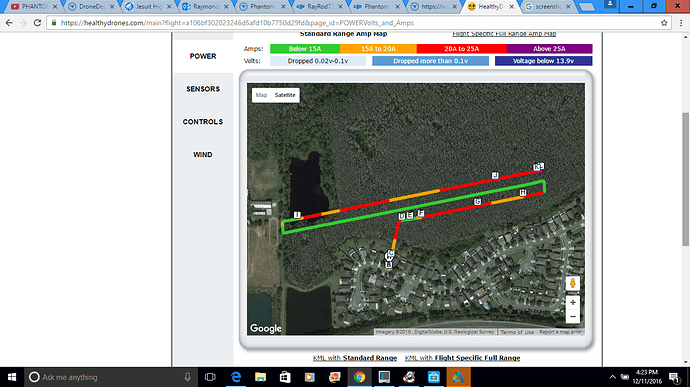 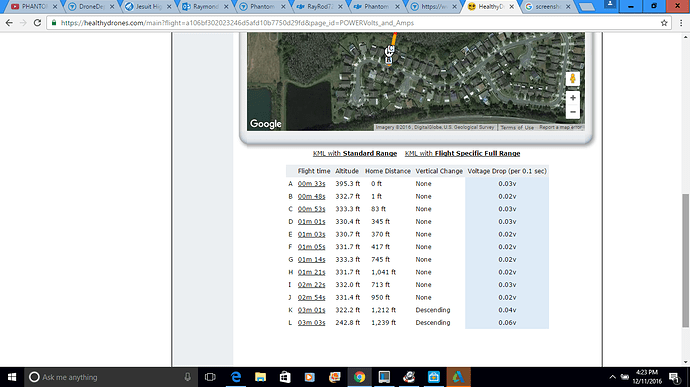 where did you get the screen shots from?I have not seen this area yet. If the batterie is missing I think that was the problem. The props would still auto rotate on the way down, That is how real helicopters make it down after engine failure. Without a battery it would also be considerably liter.

I generated this map by uploading the flight log from DroneDeploy into www.healthydrones.com.

As a side note, I noticed another irregularity in the above data. The mapping mission was set to run at 331 ft. When the drone made its initial ascent, it climbed to 395.3 ft after 33 secs. Then it dropped back down to the assigned altitude before it began mapping. Is this an indication that the mission was in trouble?

Thanks for these updates.

This looks like you had a battery issue - you should not have had, so early in the flight, the red battery indications that Healthy Drones is indicating in your screenshots.

Did you start the mission with a full battery? Have you been maintaining the batteries? (e.g., store at 50-60%, charge to 100% the night before flight)

If you use Healthy Drones regularly, you can sometimes see battery issues develop slowly over time which can sometimes give you enough warning that your battery is developing a problem.

Sorry to hear about your crash…

Thank you for your response!

Looking at the flight log from DroneDeploy, the battery was at 98% at take off. At the beginning of its fall it was at 84% and the last reading was 84% presumably right before the battery was ejected. I never found the battery in the swamp.

I have charged this battery maybe 3 times maximum since I had 4 different batteries and I was cycling through them. This particular battery was the one shipped with the drone.

The only thing I do not do is store at 50-60% charge. I never heard this until yesterday and I would not have a battery in disuse for over 4-5 days.

I have shared the DJI flight log with DJI through Google Drive but no response yet.

Would DroneDeploy look over their own logs to determine a problem? How would I send it to them?

I would definitely send this along (link to the forum too) to support@dronedeploy.com so they can look through the logs. Sorry this happened to you.

Hi Raymond. Something similar happened to me with my Phantom 3Pro, mine is ruined I think. Can you explain how you get the flight log?? Click where after the map is ready? Thanks!

Here is a how-to guide on gathering flight logs: http://support.dronedeploy.com/docs/gathering-flight-logs Please let me know if this helps.

Hello Kara. I forgot to thank you for the info. So thank you!