Please implement these two features in your new update:

Many times I use other Drone Apps just to compensate these two missing features.

Sent you email about these requests, still no answer…

Hope you will take it into consideration!

If you want to rotate the path, there is a slider to the left called “Flight Direction”, for importing KML files there is an app called KML and SHP Import. 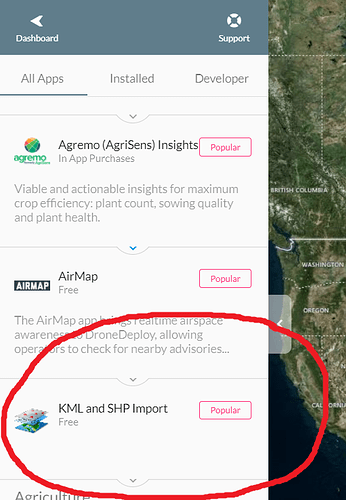 Thanks for your reply.

KML/KMZ import app is just to make PATH not actual LAYER OF MAP.

The only thing that is within DD currently that would help with this problem is the app which allows you to plan over one of your previous maps. This would only help if you need to plan over an area you have previously flown.

That is why I am asking DD developers to implement this VERY VALUABLE FEATURE, I sometimes use other apps just to compensate this feature :\ its getting very annoying to jump from one to another app.