With the new Mavic 3 coming out here in the next few days I am wondering if drone deploy will be compatible and if the .SDK will allow autonomous flight. Will this take a few weeks for Drone Deploy to test and get working or are we looking at a year before this will role out, or at all? I don’t want to invest in a nice expensive drone if it’s not compatible. Is my best bet just purchasing the M2P? I don’t want to run into what a lot of people had issues with the Mavic Air 2 not being compatible but the Mavic Air is.

The Mavic 3 will definitely be supported at some point but there is no way of knowing when. DJI has to release the SDK so that 3rd party developers can access the system. This could be 3 months and it could be a year. It will probably happen before the Air’s and Mini’s though.

Just got this email from DroneDeploy…

In case you haven’t heard the news, DJI has released the Mavic 3. The Mavic series drones have provided tremendous value to industry leaders, so we’re very excited about the newest generation.

You can rest assured that we will support the Mavic 3 in the DroneDeploy Flight app once available, and we are working closely with DJI to offer preferred functionality.

In the meanwhile, if you need a recommendation for a drone, don’t hesitate to check out our list of supported drones.

I’m looking forward to buying the M3. are you guys sure it will support DD?

I would say 100% but it’s also dependent upon DJI not only if they want it to be but if they break it.

I’m having a bad feeling about it. not a single drone using DJI FLY supports DD. But that 4/3 inch sensor, I need it for taking low light epic shots.

I’m having a bad feeling about it. not a single drone using DJI FLY supports DD.

That’s not really surprising considering they are all of the newest consumer drones but also in the fact that DJI Go is obviously on it’s way to end of life.

My fear is that DJI may be trying to move forward with distinct separation between its models and markets. We may be getting to a point where it may become harder and harder for off the shelf drones to do professional mapping. To me it’s a blessing and a curse because while convenience is great there is a point where the profession needs more controls in place to discern between prosumer and professional. I just don’t necessarily want to be forced to use a $10k+ drone to do it.

Check the timestamp of 3:04 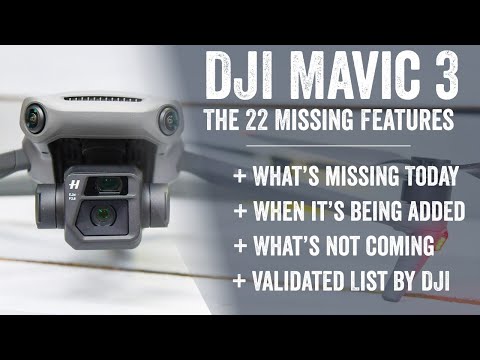 Ahh shit. DJI has no plans for waypoint.

Also, how is this drone a professional if there isn’t any plans for Dual Controller Mode?

Good catch but in my opinion that is either misunderstood or just untrue. They probably don’t have any path to providing the ability to create manual waypoints in their software. Plus DJI is not giving out any official information on future SDK releases even on the Developer platform for the Mavic 3 yet so I really doubt everything this guy says is 100% factual. The fact is that none of the consumer drones have automated waypoints as part of their initial release. It’s always a 3rd party. I am almost certain the Mavic 3 will get joystick waypoints but it’s too early to tell about onboard waypoints.

I have been professionally mapping for 7 years with multiple kinds of drones and have never used a dual setup. Some people need it all the time and others never will.

yesterday, I lost my P4 in the river. It went down automatically I didn’t have any controls over it when it went on the river. There was a lot of current and I couldn’t find it anywhere. I don’t mourn bcz I earned way way more with it than it’s price. So, now looking forward to buying mavic 3.

Agreed. We work hard at dotting every i and crossing every t but we still have 3 casualties over those years. Drones will go down, it’s inevitable.

So mate, do you recommend the M3? I’m getting more wedding photography these days than mapping. But Mapping is very important for me also.

According to specs and model history yes but I’ve never seen one first hand and with the documentation you shared and the possibility that it may never support onboard waypoints then I’d say no for now. We know the Mavic 2 Pro works so I would get your venture running on that and upgrade to the Mavic 3 when the time comes and price has come down. You could probably almost get a refurb M2P and P4P for not much more than the cost of the M3 alone. Just another alternative.

Bought the Mavic 3 Fly more combo. The camera is beyond awesome especially the low light performance. Never seen a drone capture videos like Mavic 3 does in low light. Very pleased with it. Just hoping DD would be compatible with the M3.

Also bought a Phantom 4 Pro refurb for only 400$ for mapping.

DJI just released an update a week ago. Any change that is going to enable Drone Deploy to get the Mavic 3 working?

Do you have any more info? As far as I know the Mavic 3 is not on the mobile SDK yet.

Hey guys, thank you so much for your insightful comments! I’m quite new to the world of drone users, but I must say this is transforming into a real obsession. I ordered a DJI Mavic 3 a couple of days ago, and I cannot wait to see what it is capable of. Do you have some particular suggestions on how to get the best experience out of it? I’m heading to Mexico in a couple of weeks, so I want to get as prepared as possible. I managed to find some useful information on https://weflywithdrones.com/, but I’m still looking for more insights. Cheers!

The best thing about this drone is the 4/3 inch sensor and the awesome active track. with it, I can now take some complex aerial videography without having any worries about crashing the drone. But be aware, that you don’t want to trust the Active track 5.0. Just use it manually and the active track would blow your mind if you used any DJI drones earlier.