Hi. If mapping a large area which requires various take off locations with varying elevation points. eg. 20m, 30m and 50m… What is the best method to capture. Should I for example fly at 120m at first location, 110m the second and 90m ie adapting flight height according to the changes to location take off points. Thanks in advance

You should be able to use Terrain Awareness but there is a small chance that the surface used may not be available in your area. This would need to be a support ticket.

Thanks Doesn’t look like it is an option for the majority of the site. I thought this was a problem or issue Dronedeploy had fairly straight forward solutions for as there would be discrepancies as 120m from one position won’t be the same when I take of like 500m further along where the ground elevation is now about 30m higher than the previous location

Do you not have access to terrain awareness? Do you have a KML of the flight area you can share? You can PM me if you like.

For some areas and for other not. I will PM you thanks

I was able to find the site from what you sent and the hangup here is that they only allow up to 200ac for terrain awareness so you will need (I had to) split it up into 3 different flight plans. This is because the drone can only hold so many waypoints and besides the turns TA creates intermediate waypoints at each grade break. I digitized 427 acres so you might only need two if less than that. You can daisy-chain them so it still seems like one flight in case the battery swaps can keep going instead. 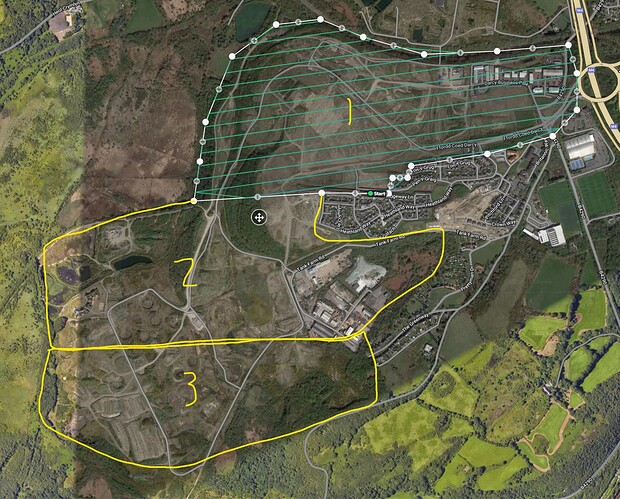 Thank you, it includes the reservoir on the other side of the railway also, sorry my image wasn’t great. I had planned to divide in three, but not that division and direction, so thanks that is an interesting division. May even need four to cover the reservoir safely.
My only query remains that my take off location in location 1 will be about 20 to 30m less than my take off location 2 and probably 3. So I was wondering if that difference will create an issue when stitching the map. Not sure if my query is clear.

No, that makes sense. Basically the drone knows where it is and when you use TA it knows to go 300ft AGL because it knows where ground is within about 10m so always allow enough room to clear verticals like trees.

One trick is to rotate your flight direction so that you are running along the slopes as much as possible and not into them. This will create many less grade break waypoints and the overall flight will be smoother which too me means that the geotags will be more accurate because it is not constantly and more abruptly changing altitude. Flight plan one looks like it has a ridge coming into it and you can see how the east side is much smoother but I don’t know that you can make it much better. 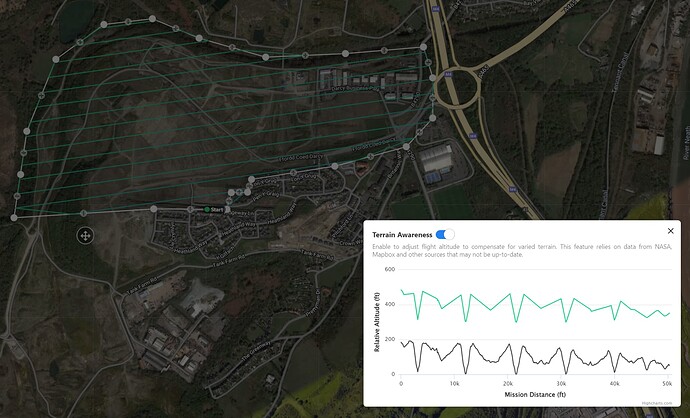 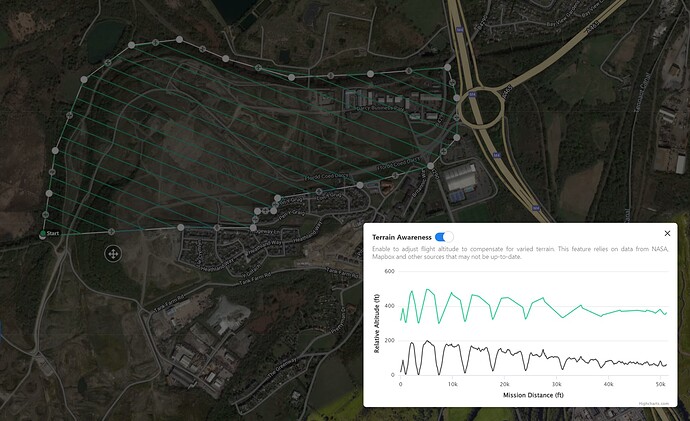 That is really interesting thank you. So I take it the second option you have sent is better, a lot smoother variations and no drops and sudden rises.

That would be the idea. I didn’t see a direction that was a dramatic improvement but that at least smooths out the east half of that section. Look forward to hearing where you end up!

Hi got the job done, unfortunately it was sunnier than I would have liked, to heard from client yet, but think it is ok. Thanks again