Flew with 3.2.1 yesterday. I used the mode switch on my P4P to go out of P mode into Sport to exit automated flight and DD incorrectly announces “gps signal lost…” and something about RTH not being available and pilot needing to take control.

GPS was fine, RTH would have worked fine. And the pilot did need to take control. So the notification was part correct. I did this on 2 occasions with the same result.

If this has not been fixed in 3.3.0 (Feb 1) then the engineer should fix this as it may be confusing to newer operators.

PS: Still waiting for the ability to completely disable the apps incessant desire to talk to DD’s servers during a mission. Pretty Please!

Same here for the past couple if weeks. I take control at the end of every flight whether I am switching plans or just finishing off a battery. Just kind of accepted it since my action was outside of the design.

The app should only acknowledge that the mission has been interrupted and the aircraft is now under manual control. It should not say that gps reception has been lost if it hasn’t… BAD ROBOT!

In the previous version I was using, 2.x.x, it supplied an appropriate notification. So, they broke it.

Still on 3.2.1. I do not see any updates available beyond that. I just realized you referenced the Air 2. I am actually on a 5th gen, but did experience the same thing before.

Actually, I checked the store and there it was. My updates didn’t show anything. Drives me crazy how sometimes it updates without me knowing it and then this happens. I’ll move to it and see what happens. Thanks.

I don’t see a notification of an update either. But iTunes shows v.3.3.0 released Feb. 1

I dunno what’s up. 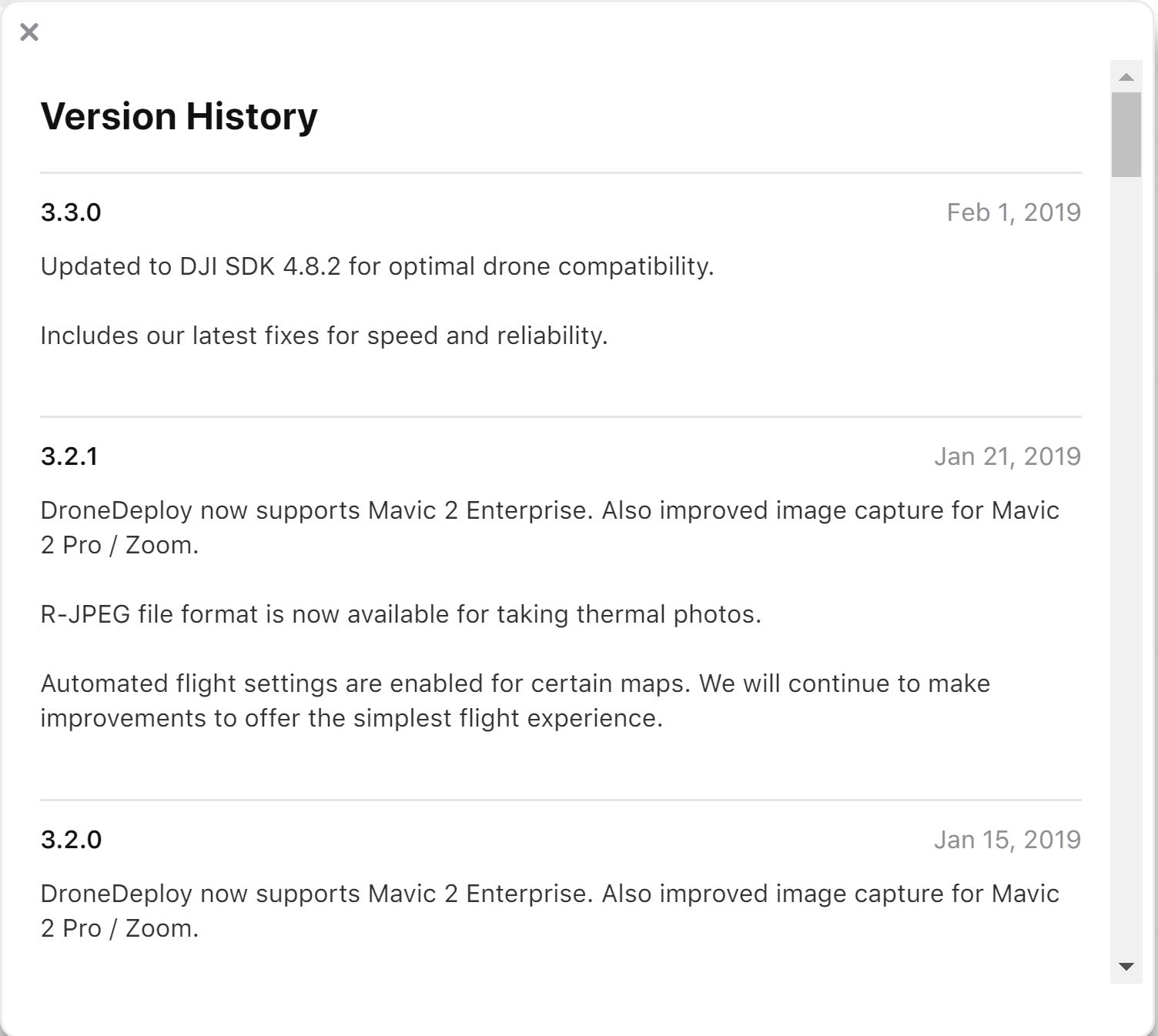 Simply acting on the sticks take you out of the automation.

It does not. You have to change from p-mode to s-mode. The subject of this thread is the message that is received when taking control.

Mine does, I usually take over at landing. Just using the sticks. and no message.

That is because the craft is already in RTH at that point. In my case, I disengage the mission manually before it goes into RTH.

Same here. It didn’t do it today… ugh.

Hi guys! We would be happy to investigate these potential notification errors if you could please email us with flight ID’s / map names - support@dronedeploy.com

Got the “lost GPS” pop-up and verbal when clicking out of P mode. The drone behaved as expected but the notification is incorrect and misleading.

@Adam_Carp I dont process with DD so no map associated. Though I don’t know what a processed map would have to do with incorrect notifications in the app before there is a map. But whatever.

EDIT
I see there is a version released March 1st. Maybe it has been fixed.

Scared the crap out of me when I got the same notification 3 weeks ago. Again, no particular map but has happened every time since when I click out of P mode.

Very possible to temporarily lose GPS and regain it.

Although the RC seems to suggest otherwise. The signal strength remains the same the whole way through and the drone doesn’t wave about in the breeze until I re-enter Go4. GPS is fixed and rock solid.

The only thing that could cause this that should is flipping to A mode accidentally. I can verify that it also happens switching to S because I realized it before last time.

Very possible to temporarily lose GPS and regain it.

Adam, it’s certainly “possible” that the exact instant I switch to sport mode the craft looses GPS reception on several different missions on different days. But I doubt it.

The notification is partially correct. It says that the operator needs to take control which is true. I think the engineers just have the message wrong for this case.

Could you ask your engineering team what notification should be displayed when the user terminates the automated flight before reaching the last waypoint?