How fly a M600PRO without an camera?

I installed an Arduino to control a special device (LED) when DroneDeploy do each trigger command, but DroneDeploy did not recognize any camera installed during the pre-flight check.
Is there any way to emulate a camera to pass over this restriction?

Thank you. Could you give more details about this solution?
Truly speaking, I need a kind of by pass of such restriction.
I connected this arduino in PWM bus (“F” ports) and now, I would like to have a strip of triggers during a fligh using drone deploy.
How can I do such “by pass”?
Could you help me?

I am wondering if you can start the image captures in DJI Go and that in turn will start the events.

Then open DroneDeploy and if it will control (fly) the Drone then you are accomplishing the same process. You will end up with extra photos at the beginning and end, but the should be easily identifiable and deleted.

Bring your logs into RTKLIB. 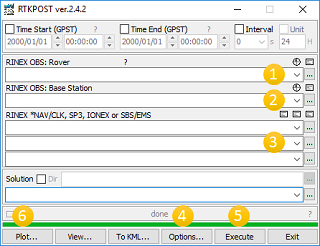 How to: An introduction and overview using RTKLib to post process RINEX data produced by a Bad Elf GNSS Surveyor

Photos and GPX files into Geosetter and update the geotags of the photos.

How to geolocate Images using a GPX File with GeoSetter

It will take a few questions and tries, but is pretty simple and quick once you know the workflow. We’re here to help.