Help Settings and Height for Stockpile measurements (in a pickle)

I have 170 acres to Fly, the client wants to estimate their volume on the piles in the gravel pit (there is conveyors belts on some of them) but also fly the entire site for mapping 3D.

IF I fly a lot lower (100ft?) Then I get more details but there is absolutely no way I could manage to fly the entire site as this would take about 25 batteries or so to fly that much data…

what would you suggest for flying such a site to be able to deliver the client some results. Fly the entire site at 220 FT and then reduce it to a smaller Square just above the Pile at 80-100 Ft to be able to have correct details on the stockpile especially around conveyors?

Also when it comes to upload do you pick Terrain because its a massive site and mostly terrain? or do you pick structure so the pile around the conveyor show up better??
Confused pilot over here to be able to deliver a great product…

Hi @EliteDS! If all the client is requiring is a map with stockpile volumes and then you should not run ANY oblique imagery and ALWAYS process in terrain mode. Are you using any GCP’s or RTK/PPK on your drone? They are not needed for individual stockpile calculations unless the stockpile cover more than about a 2-3ac footprint. Any larger than that and I would start thinking about it. If they are just wanting a map for logistics then you don’t need them. If you are trying to get less than 10cm relative accuracy, you DO need GCP’s or RTK/PPK. If you are trying to tie to a known local control network then you WILL need GCP’s. If you use GCP’s do NOT use oblique imagery. If all you are wanting is a pretty 3D model then do what you did and don’t use GCP’s.

My typical flight would start at 200ft with 75%/65% overlaps. This should take 5 batteries to fly 170ac unless it is a really unusual shape which pit usually aren’t. If you are right on the edge of a battery count then try raising you altitude by 10ft and changing your overlaps by 1-2% to see if it reduces a battery. If it is definitely the extra battery then leave it.

On sites with conveyors you will need to take additional shots at/around the conveyor the make sure you get overlaps on the top.

To do the takeoff draw you normal polygon using triangulation as the base plane and make sure none of the point on the toe of the pile touch the conveyor area. Then make a separate polygon around the conveyor so you know how much you need to back out of the stockpile number. Use triangulated for this as well. Check it and dial it in the 3D view. In this instance it was a little over 1000cy. 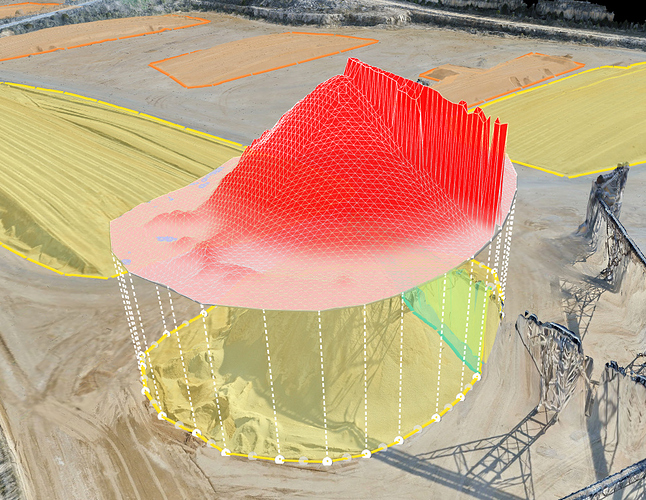 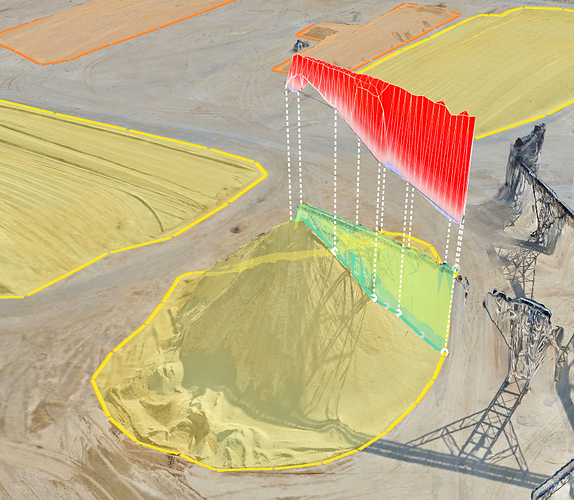 Thanks so much for the reply,

so when you say I should not use any oblique imagery do you mean I should turn the "crosshatch 3D off and just run the parallel lines thats it? And you mentioned taking extra shots by the conveyor, but that would be obliques right? maybe lower altitude to have a clear picture of the pile? I haven’t looked at ground control points yet, I guess i’m new to this and its still a little complicated for me so I’ll do my research on that shortly and will definitely use them soon.

Im not necessarily looking to have a pretty 3D model I just want them to be able to calculate the volume on the piles accurately. Which seems hard by all of what Ive read so far.

Is worth doing two passes? My set up right now was :

That shows 9 batteries for 92 acres…Im doing something wrong?? 5 batteries with no Crosshatch 3D.

Just run the nadir lawnmower pattern. Taking off stockpiles should be super easy so let us know what you/they run into. They crusher/screener conveyor is probably the trickiest thing you are going to see. Beyond that it’s just about using the right base plane, but in my opinion triangulated should be the default selection with occasional lowest point. Linear should only be used on very flat bases. Let me know when you are ready for GCP’s and i’ll run a couple of options by you once we discuss why you think you need them.

My typical flight would start at 200ft with 75%/65% overlaps. This should take 5 batteries to fly 170ac unless it is a really unusual shape which pit usually aren’t. If you are right on the edge of a battery count then try raising you altitude by 10ft and changing your overlaps by 1-2% to see if it reduces a battery. If it is definitely the extra battery then leave it.

So Michael, if you start at 200ft, do you do a passage lower at the actual stockpile for additional photos, or do you fly manually later on and take shots around the pile at the conveyor? do you take them at an angle manually or straight down?

Ill go reshoot tomorrow, I edited my post above with my settings I was using yesterday.

I need your Number on speed Dial. Thanks for your info its been very helpful.

Just manually fly and take some more nadir images. Think of the rule of thirds. You want three shots x and y that will see each detail you want to have sufficient overlap. It doesn’t matter if your paths are exactly the same width and completely straight like the DD mission, just get another 9-12 shots somewhat gridded of each object.

I am having trouble understanding how just taking more nadir shot will make everything look better but im guessing there is a answer to the madness. so you’re saying I can fly that entire mission at 200ft in a lawnmower pattern without the crosshatch and get a great image for the pile?

Also for the additional NADIR images. do you lower the altitude at all so you get a clearer shots of the pile then? I think I got it. Im gonna go practice but im just making sure I get it all correct before I go as this is my second shot already…Here is a print screen of what ive shot so far by the conveyor…you can see its not super detail. would that mean I would have to lower the altitude a bit? perhaps 150-180 feet? What is the lower altitude I should not go below?? I guess that would affect my speed and time of shooting as well…

I’m not seeing the screenshot.

First, I say 200ft because that is my default. It does also depend on how tall the stockpiles are, but I usually don’t see them much higher than about 70ft or so. This leaves 130ft from the top of the pile to the drone. This is the factor that we are overcoming with the additional images. I would fly them at the same elevation. The shorter the distance from subject to the drone gets the less overlaps you are going to have in comparison to the ground. With the figures I stated you will probably get 5-6 images per pixel on the top of the pile. The goal is to make sure that we have at least 9 images per pixel meaning that every aspect of each object is seen 9 times. Twelve would be better, but is not absolutely necessary. The only thing oblique images are going to do is get under the belt and other equipment better which doesn’t matter for volumetrics because you have to cut it out anyways. Part of our process is creating a DTM and getting rid of everything that is not materials or ground so I wish it wouldn’t capture the conveyor at all… 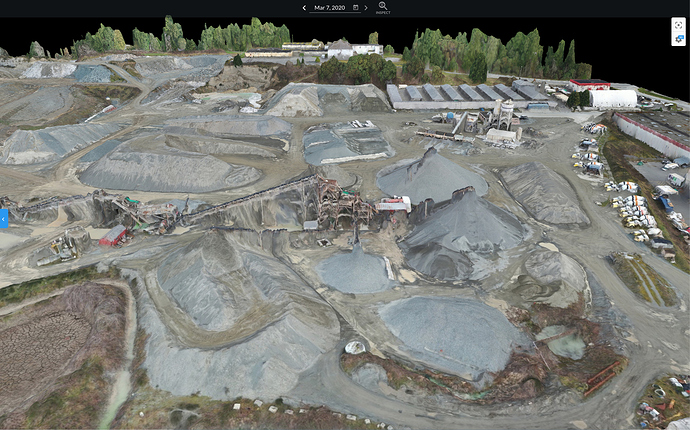 Looks pretty typical of a materials supply facility. I can tell there were no nadir images on this one because of the lack of definition in between objects that are close together like the concrete trucks and the buildings in the back.

Do you know the height of the tallest conveyor in the middle?

This was processed in terrain yes. when you say there was no Nadir images I thought the mapping was taking enough NADIR images so you’re saying I need to go manually on top of the conveyor and take more images? just more of it and closer together? and perhaps move around sideways etc?

If you ran Enhanced 3D with crosshatch on then there are no nadir images. The obliques take the place. That’s why it’s a “3D” mode. Without the crosshatch you can run nadir and the perimeter. This is better for something like a building or other freestanding structure.

So you’re saying for a Map it’s better to use NADIR without the crosshatch? I thought the crosshatch would automatically capture more images and from a different angled pattern.

But I guess the angle of the camera change as well. I have another map tomorrow for 2D mapping a farm. so i’m guessing no crosshatch. I just thought it would capture more images as the « picture » crosshatch looks like more flight pattern to capture more image from a different path.

Im confused as to when do crosshatch and when not. and also when is it worth going more overlap.

The only time you need to run oblique images whether in a crosshatch or the perimeter option is if you are just trying to create a nice-looking 3D model of vertical structures. Nadir images alone are much more accurate through photogrammetry for terrain. Some people might think that oblique images are more accurate, but that is only because the 3D model looks better because it captures detail of vertical faces and somewhat underneath coverage.
Obviously crosshatch does capture more images, but because an oblique angle captures so much more surface area the overlaps don’t need to be as high. I typically run 60/60 when using crosshatch.

Michael is giving you good info.

A single lawn-mower grid pattern with nadir gimbal angle and sufficient overlap is what is recommended for the best photogrammetry solution, which is what you are after.

Hi,
I regularly fly a stockpile pad of around 200 m x 250 m for volume calculations.
I use 7 GCPs set out with a DGPS.
Would be great to have fixed GCPs but truck and loader movements rule out a good geometry.
Around the perimeter would not be a problem but anywhere near the center of the pad would.would be possible to set one out on the feed ramp 60 m in .Would this geometry of GCPs render good results?

Thanks so much Michael

I haven’t used GCPs as I’m not familiar with the process and it looks complicated. do you need equipment to have it done? do you recommend any reading material on it?
Would the stockpile be a lot more accurate or what would be the change for such a job as calculating stockpile ?