Finding the volume of Stockpile

I have read an article for volume calculation for STOCKPILE http://support.dronedeploy.com/docs/volume-measurement
I want to know how the drone is capable to calculate the height of the stockpile, and how they are calculating the volume.

@naman14
Google Photogrammetry or look at the following link:

Photogrammetry is the science of making measurements from photographs, especially for recovering the exact positions of surface points. Photogrammetry is as old as modern photography, dating to the mid-19th century and in the simplest example, the distance between two points that lie on a plane parallel to the photographic image plane, can be determined by measuring their distance on the image, if the scale (s) of the image is known. Photogrammetric analysis may be applied to one photograph, or m...

Hope that helps get you started.

d to calculate the distance o

Can you please elaborate more.

Initially drone will capture the images, then it will develop the 3D model and from that it will hep me in determining the volume.
Am I in right path ?

you will fly the site and take your pictures. DD will process using their algorithms and deliver you a stitched map. Depending on the plan you paid for you can do the following:

Thanks for the explanation. I want to know that how it is calculation the height i.e z axis from the 2D image.
Even it is converted into 3D model, still I am not able to understand how the scaling of x,y,z axis is been performed and how the volume is been calculated.
I want to understand the whole procedure in low level.

@naman14
I think that the high level explanation is explained above in the Wikipedia link.

For the middle level explanation I always think of the drone as a kind of base station instrument. It is continuously tying into satellites to determine the x, y and z location of the drone. When you take a picture the coordinate is recorded and attached to the image that you took. This is great, however you are not surveying the location of the drone, as you are actually trying to survey the ground below.

Drone Deploy comes in for the low level, detailed part of the process. Through the use of software and algorithms, they are able to use geometry and math to extrapolate the ground x, y, and z properties. The process involves looking at commonalities between images at different angles (hence the overlap setting) and calculating the locations. Kinda, sorta how we look up at a stars throughout the night to determine our location on the earth.

Disclaimer, I could be way off base on DroneDeploy’s process

Piggybacking off of the fantastic “Middle level” explanation that @dragonflyAS gave… Since you have a collection of overlapping images, and each image stores its position (of where the photo is taken from GPS of the drone), rotation, and camera angle / settings in an EXIF file given with the photo. From this photogrammetry software projects rays (also known as a raycast) from the point of origin (where the photo was taken) through the picture and into an imaginary 3d space.

By using the overlap in the photos to create tiepoints (commonalities in the photos) and repeating the raycast for the entire set of photos the rays will begin to overlap in the 3D space (in x,y, and z) from all of the pictures. This would be the sparse point cloud… think of it as a low def version, from here the process repeats a few thousand to millions of times depending on the data in each picture, creating a dense point cloud. This can be used to fill in the edges and faces to create a 3d model. To get a better understanding of this i suggest looking at the picture data in your map, you can see where each photo is and with a bit of imagination see how casting a ray down from multiple images will create an overlap and give you a 3D point. This may also give you a bit more respect for your geometry teacher in high school as this is the answer to the eternal “but when am i ever going to use this!” question. 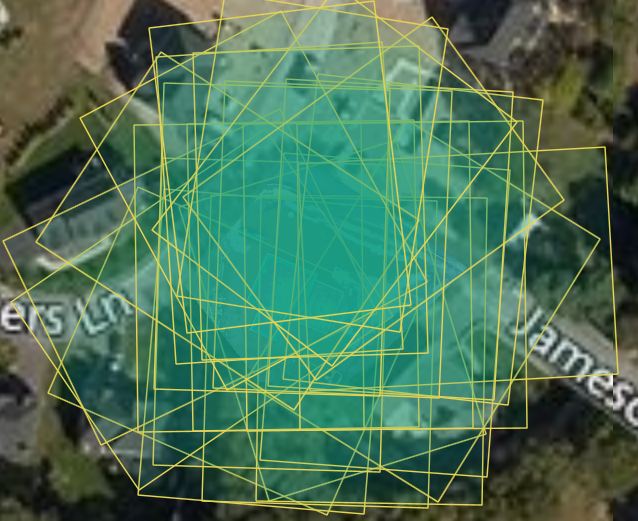 image.png638×521 431 KB
This is a snip from a map with the images toggle activated, i tried to get a 3d view of this as well but they don’t show up in the 3d view… ill suggest this to DroneDeploy. Hope this helps to complete your knowledge!

PS Take a look at the Dense Point Cloud on one of your 3d models and it may help too!