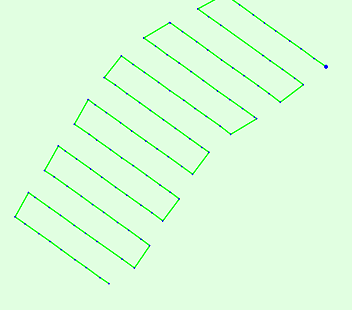 Just like the photos, if you use Phantom 4 Advanced to take pictures, you may find that you lost some photos in the pre-planned flights. You can find out at the track map of P4A, while another is ok using Phantom 4.
I do not know why? Likely, some bugs exist in Dronedeploy.
Could DD figure it out as soon as possible.

I know, DD just started to support Phantom 4 Advanced, two months ago, DD even can not connect this device.

I wish, this simple error will be cut off soon.

best wishes for all
Jackie

if you’re seeing a gap in photos like the example you posted this is most likely the P4A camera failing to save or take some photos during the mission. We don’t control the camera or change where photos are taken after takeoff. This can just be a temporary problem on the camera, an SF card that hasn’t been formatted in a little while, or maybe something else.

Yes, the probelm is that P4A camera failing to take some photos during the mission.
this is in the automatic shooting mode. i did not control the camera during the flight.
So, I think the reason probably resulted from DD.

What I’m saying is dronedeploy also doesn’t control the camera after takeoff. For a situation like this, its likely an issue with the camera during this flight. Sometimes formatting the card before each flight can help.

Thanks， Chasemgray. I like to try it as your suggestion. Hopefully, this works.