It certainly could be an combination of the two Terry but our results show it to be with the drone. I own a unit and follow the Emlid Reach forums. People there have shown plots with external GPS units attached that show a constant fall in altitude with the drone as it flies while the altitude data from the drone looks constant. The Phantoms are a great platform and just need a little tweaking to get some great result from them. Just something to be aware of.

The M+ units are a completely different animal.

Can you send me the link you found to the P4P falling graphs? I’ve been thinking about trying them, but not if that is the case… On the other hand PPK on the P4P would be pretty cool.

Here’s my last two from this morning.

The Phantom 4 Pro uses a barometer to measure altitude with ZERO GPS contribution according to my research. So if the barometric pressure changes during a mission the elevation of the drone will change. This makes a 900+ foot difference over the course of a year due the typical 1" chage in barometric pressure or 1’ change due to a 0.001" change. So it is important to log the barometric pressure duing any drone height experiments to obtain good results. This source of elevation error would be my main concern when using 2 takeoff locations. Fly them with minimum delay between. DO NOT fly them on different days as the barometric pressure difference could introduce many feet of elevation error. There is a way to fix this error if you know the exact elevation difference between the flights: take a picture just before takeoff, look at its reported elevation in the exif data of the photo and the add an elevation offset to the exif data in one set of photos so the elevation difference equals the takeoff points difference. Or if there is a way to input the second set of photos to DD with this offset then it would all be done for you and you could process them together with less worry.

I’ve provided two links below. The first has the plot of elevations and you are right Terry, the P4 does use it’s barometer but it heats up during flight and provides a false reading even with a constant pressure. All our processing is done with DD and I have nothing bad to say about their product, it can only do as good as the data it’s processing. This is just some additional information to help those that need it.

Both links are about integrating the Reach with a P4. 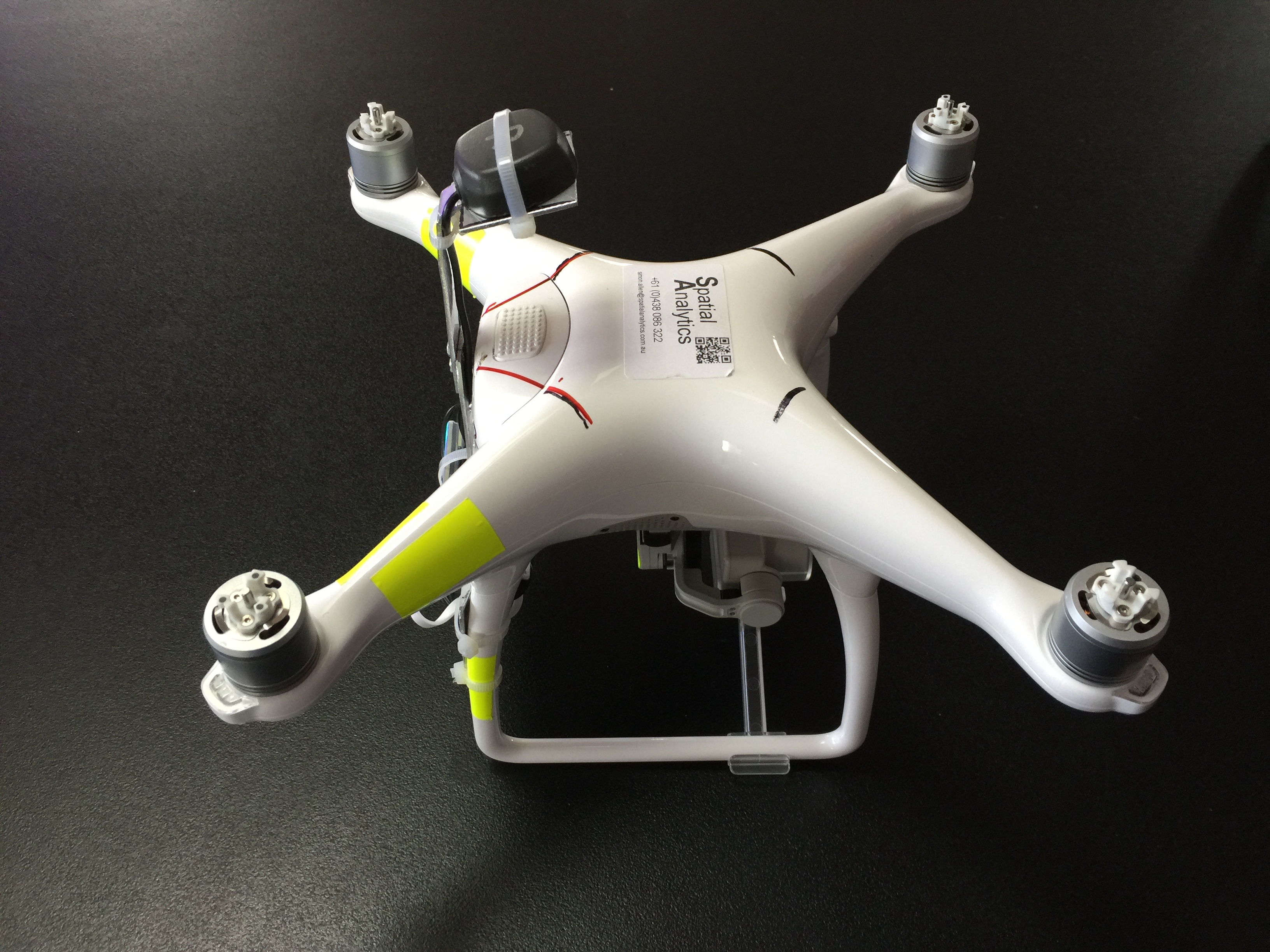 @Santiago_Escobar I have built a standalone module (140 grams) that fits under the battery, it is held in place by a tight fit and two tie wraps. I collect reach data and post process for RTK with base data collected b a second reach (standard...

Loki style Reach set up for a Phantom 4 pro

Can someone help me replicate how the Loki attaches to the Phantom 4 pro to geo-tag the images with precise timing? “LOKI is self-contained and uses an internal battery (charged via a USB port). It has been designed to survive most crashes and...

I wouldn’t say zero contribution. What holds the drone on path? Why is RTK so much more vertically accurate? The barometer provides the number, it does not determine where the drone should be.

Thanks! Every article I have found about this had something to do with RTK or PPK which is totally counter intuitive. Me all confused. As long as mine doesn’t do that I am just fine with whatever they say.

My experience leads me to believed that the barometer is used to regulate the drone elevation. I do not understand your statement that it does not determine where the drone should be. GPS cannot be used as its Z information can be off by 3 meters for the GPS receiver in a P4P drone. Since barometric pressure typically changes slowly over a 20 min mission, it seems like a good choice to use it to regulate the drone elevation.

A RTK-equipped drone (like the DJI Matrice M210 RTK) is much more vertically accurate, even though it is GPS-based, because the GPS data has been corrected using information from its base station that has a 10X better, phase-based lock on the GPS signal.

I fly my important missions only on overcast days in Oregon. Perhaps the coolness helps keep the barometer from heating up and throwing off its relative elevation reading. If barometer heating is actually causing a noticeable error, perhaps DJI could improve its performance by adding a simple temperature sensor-feedback loop.

For my precision agriculture work with Kevin, the impact of drone elevation variations and photogrammetry induced crowning of 7’ in the 3D model is largely removed by creating a DTM from the 3D model. The ground between the rows of crop (trees in our cases so far) is visible so I just grid the model, average some of the lowest points per grid and create a DTM model + fit a surface to the points. For some cases I throw in a few passes of Z-only smoothing to iron out any remaining wrinkles in the surface. Then a conformal elevation map is generated by subtracting the DTM surface from the 3D model. All standard stuff. The resulting conformal elevation map is quite flat in the exposed ground areas, typically within 3" over the 1300’ x 2700’ 80 acres site. This has less than a 2% affect on height measurement of 14’ tall trees. But for sites with less ground visible, having better drone Z performance could be a help. I am just glad that we could find a work-around for the 7’ crowning problem without having to bother with GCP’s…

If you look at my graphs you will see that 10ft variance created by the error in the drone’s GPS determining where it should be. The barometer is reading the actual values and reporting it.
As for change to the barometer readings maybe I don’t see the variance others are seeing because of my startup procedure. The first thing I do is check the drone, put the propellers in and go set it on the takeoff point. I do the first thing because I want to allow the maximum amount of time possible for the IMUs to warm up and for the system to collect satellites. On average the drone probably sits there for 5 minutes while I get everything out and do the rest of my checks.

@MichaelL must have the best p4p they ever built, lol.

I’m inclined to believe Simon Allen’s analysis after reading a lot of his posts. He is a survey professional and definitely know his stuff.

Terry is finding the same thing.

I have shared some orthos with a surveyor and he told me the entire plot was good but sloped. That was without me telling him about the known issue.

I follow the Map Pilot forum and their devs have indicated it is a known issue and they are basing that upon thousands of user data.

If Michael’s craft is immune to this behavior he is a lucky guy. But I am skeptical, no offense.

BTW, when is DJI ever going to release their p4 RTK, their enterprise event in October? I’m hoping the RTK is fast enough to log the image captures unlike the stand alone and Matrice variants which are only good if you stop and take images.

Assuming a flight path with long legs and short returns at the end (typical for all my missions), is the slope perpendicular to the long-leg flight direction? That is, if the P4P loses height with time in the air, then the fall should increase with every leg so the last leg is the lowest.

This is not what we are seeing on our missions over 80 acres sites. There is a rise towards the last legs. Is this the trend you are seeing?

I believe the RTK based experiments are capable of showing a drift down (or up) with time of flight. The question is how much is this slope (inches per minute of flight time, or something like this) and does it show up in the final elevation map after the photogrammetry processing? And how much does the photogrammetry add or subtract from the slope? And does this reproduce across most P4P’s?

Would be good to understand this issue better.

I went back and looked at some of the flights. Like you, I am seeing the elevation increase perpendicular to the long legs of the flight path. My guess is that if the drone is falling but it thinks it’s at a constant elevation the ground appears to be higher.

It would be great to try to nail down the drift but I think there would be too many variables that would keep it from being constant. Would the sensor heat up more on a cooler or hotter day, does it only reach a certain temperature gap then stabilize? We started using the P4 and DD simply for aerial images and updates on projects so it has served it purpose for the most part. There were those occasions I wanted to try a little preplanning which is why I was interested in the vertical aspect of the flights. Once we flew a couple of areas that had been flattened out it was apparent that without better meta data for the pics or GCPs that wasn’t going to be a usable function.

Perhaps it is not possible to derive a universal drift constant for the P4P but there is something else I can do: Introduce an estimated drift into the GPS of the photos and reprocess them. If I know my site is flat, then I may be able to significantly improve the flattness of my map with this technique. At the least it will give me better insight into the photogrammetry process.

Perhaps it is not possible to derive a universal drift constant for the P4P but there is something else I can do: Introduce an estimated drift into the GPS of the photos and reprocess them

Wouldn’t a better approach be to grab some quick and dirty randomized gps ground points and feed them in as GCPs? Even though they are not “true” gcps, they will probably neutralize the p4p’s altitude drift error.

Yes that is a known solution. But if I can improve the results using a zero-cost approach then that would be nice. And then if you add in GCP’s the results between the GCP’s may be better also.

@JamesMitchell grabbing two different height data sets will average the two when you process them together. The less variance, the more accurate your map. You can also use GCPs to secure more accuracy.

Please investigate the “crown” you are experiencing. There is a well known systematic doming (elevation) error associated with the Structure-from-Motion workflow that’s associated with the accumulation of lens calibration error - especially when linear/parallel flight lines are flown.

This topic has nothing to do with crowning or bowling.