I have been tasked to fly and obtain high resolution imagery over our electrical system. I am using a dji mavic pro 2 and drone deploy for my planning and processing. I have flown at 250ft and 130ft both with 75% front and side over lap as well as a perimeter 3D on different days but about the same time. Both of my processed photos show disconnected lines, missing poles, missing equipment. I know this has something to with my overlap does anyone do any kind of electrical flights or can some one help me how to come up with a better solution to capture and process better quality orthos without missing any infrastructure and electrical lines that are not connect or missing properly? 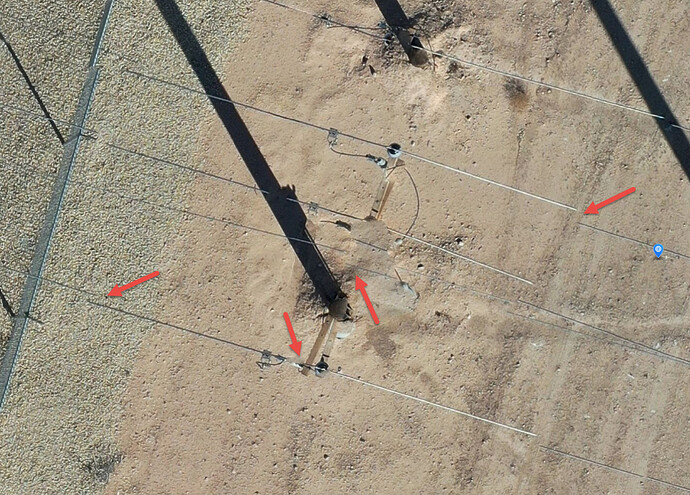 Are you processing in Terrain Mode or Structure Mode? Terrain mode has a bad habit of cutting out narrow vertical objects. Have you tried the Linear Flight app? I would almost immediately suggest Litchi and custom waypoint missions to capture this kind of data. Being able to run parallel to the lines with a specific gimbal pitch would help. The power lines are going to be particularly tough because of how thin they are so I think the lower altitude with perpendicular oblique crosshatch met be the best bet.

I have tried processing in both terrain and structure with the pretty much the same result but the structure being slightly better. I have used the linear flight app for flying the lines not really usefull around the substations but man that is a finicky app. I may try jumping the plan to 150ft with 90% front and side overlap. I have read so many mixed reviews with increasing overlap at lower altitudes under 200ft to many pictures just creates more noise in the image where as other say for complex systems it has more to relate image to image in the processing. Guess ill just have to find out and see

but man that is a finicky app.

Yes it does need quite a bit of refinement and I know they are working on it.

I may try jumping the plan to 150ft with 90% front and side overlap.

I don’t think more overlap is going to help and it may actually hurt the ability of the processing to align the wires because of slicing and the fact that they are so thin and basically featureless.

I think more tie-points from image to image would help the alignment more. The way that more overlap can help is from different angles. The idea behind using Litchi (which DroneDeploy needs to emulate) is being able to setup the flight to run facing perpendicular to the alignment with a 45-60 degree gimbal pitch possibly in combination with a nadir flight. With Litchi you can control the heading of every waypoint individually if you want and you may even be able to take advantage of terrain following if needed. Consistency of the AGL should help as well.