I have requested a UI Skin upgrade that could be user selectable. Here is a example of what I’m talking about. Screen space is a premium need, when your using a phone/tablet/laptop. 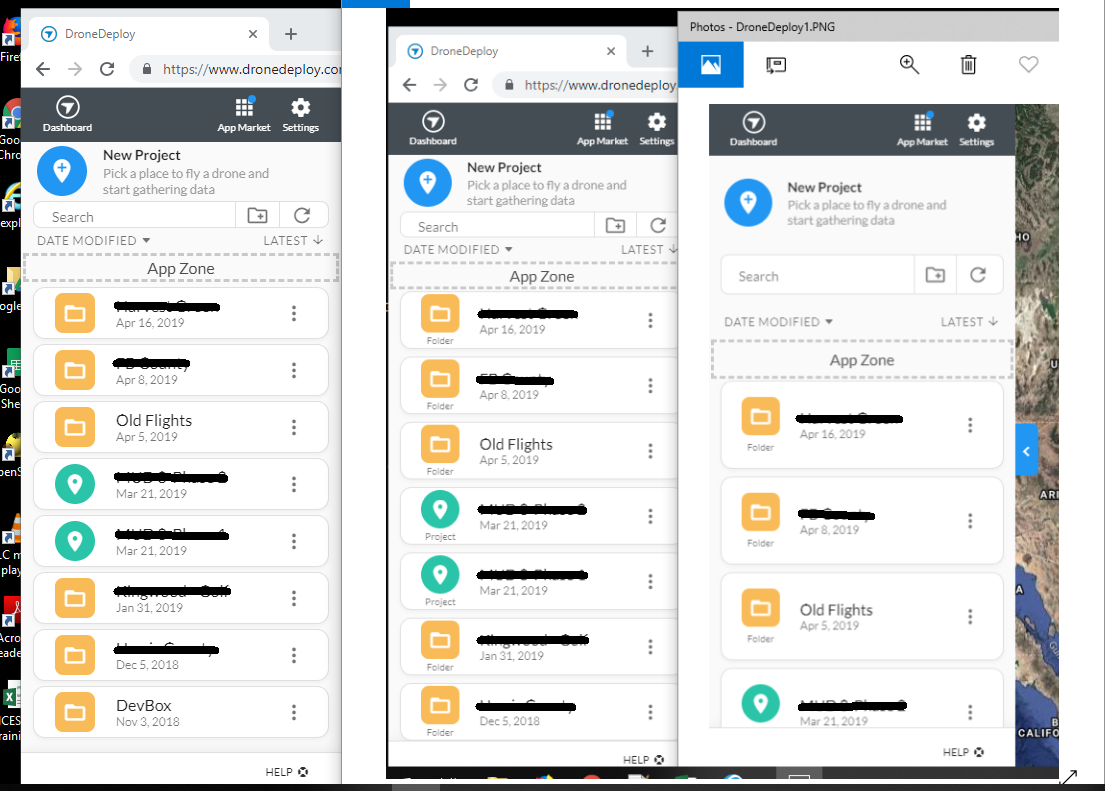 Note: All 3 Images are from the same account, by just making small changes can make big appearance changes.

I prefer the Left Image, I also requested instead of the whole left sidebar scrolling, add a DIV box just around the Folder/Project area so that is the only area that scrolls. That allows the New Project/New Folder/Search/App Zone to stay non scrolling. Maybe setting that area with a collapsible area so you can have a bigger Folder/Project area.

Also I have requested Sub Folders in Folders, that way we can have a setup like Region/County, District, Subdivision this way you can have some organization for your DD Projects.

If you’ve been around a while you would see that the UI has been upgraded at least five times in the last year. Of the hundreds of feature requests that are in queue and the tens that are in process right now I can assure you that the majority of what you have requested is there. Having an adaptable UI with an ever-evolving feature set is not quite as easy as what you would think considering the range of devices that they have to support, but I do think it is a good idea for the future. One reason for not condensing the navigation as you have shown is because it is not feasible on smaller screens like phones. With the addition of pano’s and videos as well as the new reports there will most definitely be a shift in arrangement. If you search the forum you can see that subfolders has been request for quite some time now. If we had subfolders the list would not be so long, but using the search and sort functions help as well. I’ve got about 80 folders and projects on my list right now on so I feel your pain. Thanks for making a formal request.

I’ve been using DD for many years and have seen all the upgrades. Back in Oct '18 I went to DD HQ for their annual event, that was right when they announced the latest UI. I told them then they needed Sub Folders as well, lol.

My company has a DD Enterprise account so the DD reps came out to visit with us to see what our needs where with DD. Me being a developer I had to go into How to Improve mode. They took a lot input notes from us. Then I took out to the field and let them watch my P4 RTK unit go fly a detention basin for volumetrics. I begged them to get a DD app for the P4 RTK, DJI is killing me with their half-baked product.

I also requested several new flights like spiral for antenna/towers and a few others, told them to go look at Drone Harmony and Litchi, lol my bad. I use all the flight mapping apps to get my flights in and use DD to process the photos.

The DD Reps asked me if I was active on the DD forums, oops not as much but I’ll jump in now.

All good stuff, Greg. I think the problem with supporting the RTK is that DJI has not released the remote (without built in tablet) that will supposedly be supported by the SDK. Not much any of the devs can do about that.

Nice, welcome! I was at the conference as well and moderated the construction panel. Maybe we bumped into each other. I just met with Jay and Alex yesterday during their Texas tour. Had a great time flying one of our sites and then taking the data back to walk through the entire workflow. You wouldn’t happen to be in Texas would you?

Yeah I hate the small integrated screen (it’s a nice screen) but when you have 12" IPad that you would rather use, it sucks lol.

Hopefully the SDKs will be released soon, the latest firmware says it released a SDK for the non screen integrated controllers (I think that’s what said)

Connor, Alex and Jay stopped by Tue morning in Houston to visit us. You must be in Austin. You probably did see me, I wore a Fire Department shirt at the conference.

I might be doing a flight up in Austin in the near future.

Did you have a custom case for the iPad?

Yep, in Austin. I’ll PM you my cell. Give me a shout if you would like to get together when you come up.

Yep that was my assume iPad case! Gotta love Dollar Tree Foamboard! I mean a Otterbox Case is around $200 vs my $1 case, lol.

I’m going to add some eyes and a smile and put a DD sticker on it.

Long story short after the DD Conference my drone manager decided he was going to upgrade me from my personal P3S to a P4 Pro, the following Monday the P4 RTK came out, so I said I want that! as well as a 12" iPad (we got mine 2 weeks after release and there were no rugged cases at the time) because of the DD Live Map, It only works for P4’s. Now I have both the P4RTK and the 12 iPad, too bad DJI forces me to use a Integrated Crystalsky screen on the controller and currently don’t allow DD or other flight apps. 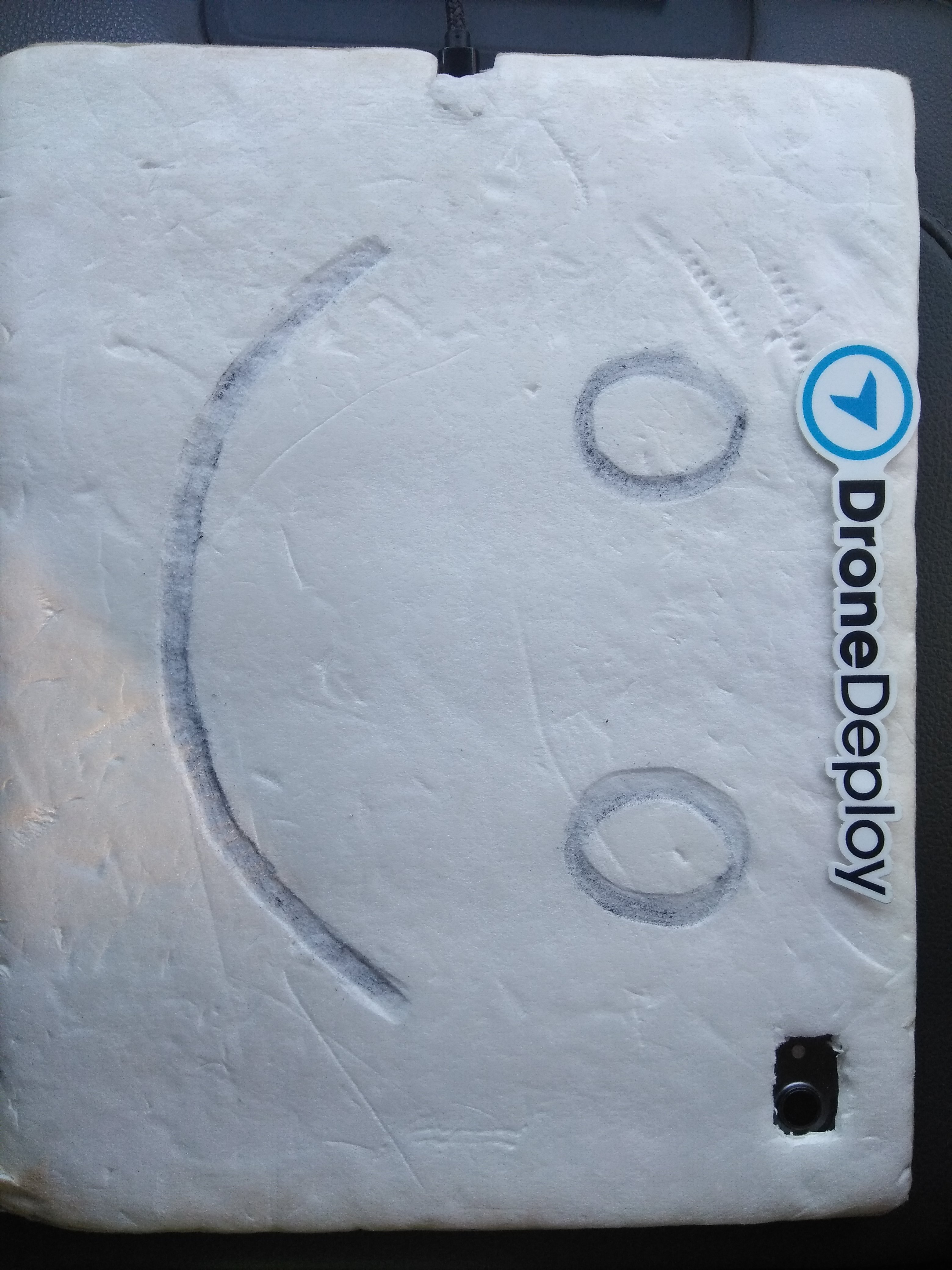 I will call him Wilson!