I don’t often post emotionally against DoneDeploy, but it killed me today. 10 Mile road way with four setups and the disclaimer is that I was trying to use linear flight. The first leg of the first set up appeared to go pretty well. Linear flight seems to have a slight bug of where it cannot calculate between the actual centerline defined and the encompassing box of the entire extent of the flight. I have had a few occasions where it tried to use the entire box and have had to kill the mission, manually fly it to the intended first waypoint, killed DroneDeploy and restart everything.
The real trouble was on the second leg of the first set up. The new version has been very lagging. It would not load the dashboard and particularly the thumbnails for each mission. This was running the Verizon service from my tablet with Wi-Fi off. I could not get it to load enough to get to the flight plan so I turned on my mobile hotspot on my phone and Wi-Fi’d the tablet to that in addition to the service on the tablet. It’s then loaded the dashboard decently, but I could never get to the flight so that I could commence the mission.
I’ll go back to before all of this saying that I noticed several crashes of DroneDeploy while I was simply exploring the maps and trying to place location pins. This happened at least four or five times.
@Andrew_Fraser @Jamespipe, Can we say uh-oh?!

While we are on the linear flight planning app can we please please please look into the ability to adjust the start-stop position. It always uses and endpoint or you can reverse it to the other, but this is completely inefficient for long corridors.

Michael, do you think this lagginess is limited to the linear flights, or do you think it’s across the board? I flew last Thursday 7th using a standard ortho mission and didn’t have any more lag than my first initial 10-15 seconds after hitting ‘start mission’, but I don’t know if the app had already auto-updated by then.

Having read your issues above, I rushed to the app in hope I was still on V4.4.1, but no. How do I turn off auto updates on iOS? 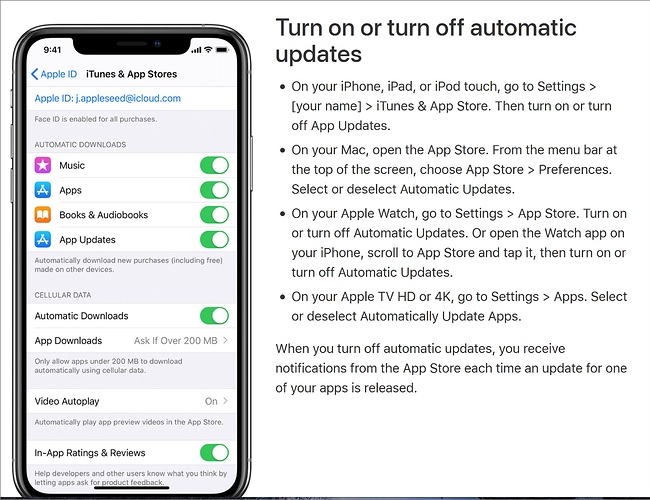 Update apps or use automatic downloads

Learn how to update apps manually, turn off automatic updates, or turn on automatic downloads.

Done. Thank you. In Android, there is the ability to pick what’s to automatically update and what’s not. Presumably with this toggle on iOS, it’s all or nothing?

Thanks Dave. That’s really unfortunate that we’re having to deal with all this through the new interface. Unfortunately that kills a lot of the other apps that I have through our management system. It’s a great tip for other users though!