Folks,
I plan to use DD to map a very undulating area, where the ground falls away from the Home Point (up to 60m below HP) on one side, but slopes up (up to 80m above HP) on another side.
The DD plan I have created suggests a height of 60 metres.

The question is… will the drone follow the terrain, dropping down on one side and up on the other… in other words… will it fly 60m AGL or always 60m Above Home Point.
If the latter, then it will be too high for decent mapping on the ‘low’ side, and will crash into the ground on the high side.
Any thoughts on this??? I have previously only done relatively flat ground where this didn’t matter, but in this case, I may be in strife!

DD doesn’t follow the terrain changes during the flight and relies on the home point AGL.

galdier… Thanks for that reply. I had suspected that was the case… I will just set a higher altitude.

Terrain following had a short beta trial and had to go back in for some thought, but please sign up so we can try to get it back to beta. In the meantime, if you fly this type of terrain often then I would suggest trying Map Pilot for DJI if you have an iOS device and DroneHarmony for Android. I personally use Litchi as it is much more versatile, but it is paid for and takes more effort to setup. It is available on either platform. 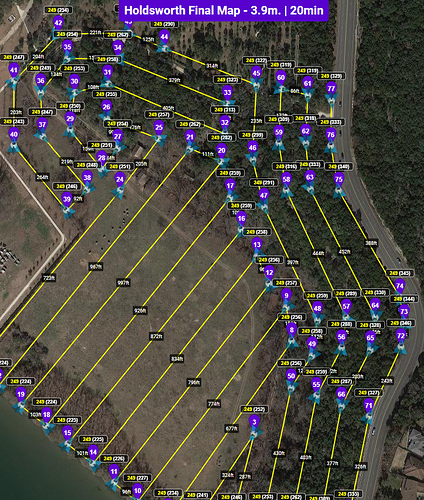 Advice on GCP's for corridor mapping

Here’s one of the crazier maps that I have done in Litchi. Solely for the fact of terrain following. Other programs will not do this with a change in direction like I have. The purposes was to run parallel with the major slope so that the drone would...

Oops, here’s the link to the TF beta.

We are in the process of running a private beta of our DroneDeploy Terrain Following feature. This feature enables the drone to change elevation during the flight, tracking the gradient of the terrain below. This will improve the quality and...

Thanks Michael, great information!
I may use Map Pilot as you suggested, and I already use Litchi for other waypoint flights.
Alternatively, for the specific terrain which led to my original post, I might just go with the DD app, and increase the altitude to miss any of the high points.
It will be interesting to see the results from DD processing… I can then make a better decision for he future.
rgds
Mike

I would suggest at least 50m above the highest subject and 80-85% overlaps to make sure you get enough shots to stitch well. Remember that being closer to the subject greatly reduces the field of view and the number of overlaps. You will get the 80-85% on the home point, but probably only around 75% on the top.

Example. This is what happened to another contractors map when flying a static 300ft altitude on a site with 160ft of elevation change. I flew it with a custom Litchi Terrain Following mission and it was beautiful. Even with a slight wind on the tops of the trees.

Have they got Terrain follow working properly now? On Android?

I haven’t used DD for a year or so, this was one of my gripes! I honestly cannot see it would be that hard for programmers to implement.

It has worked well, but the caveats have been that it is not on Android and it does not cover the entire globe. The United States is well covered, but I have seen quite a few instances in Europe reported.

@Jamespipe, Any initiatives on TA? Android?

We are working on bringing Android up to speed with iOS. There is a lot of work to do so, but our target release is at the end of March.