Compatibility with the Mavic air 2 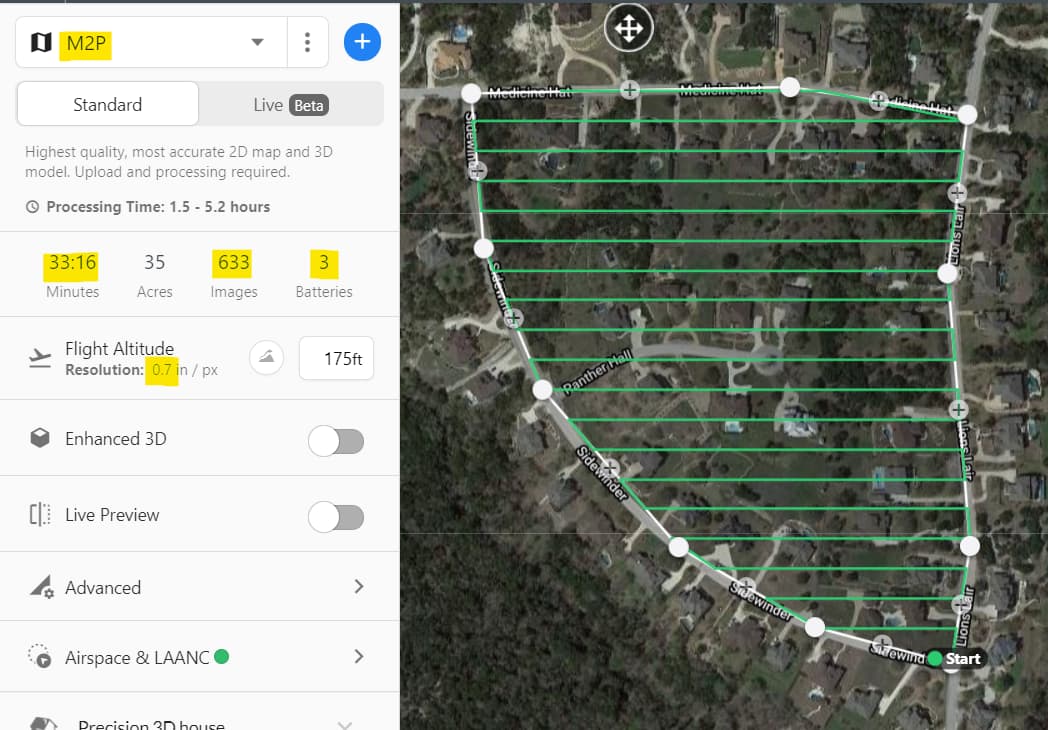 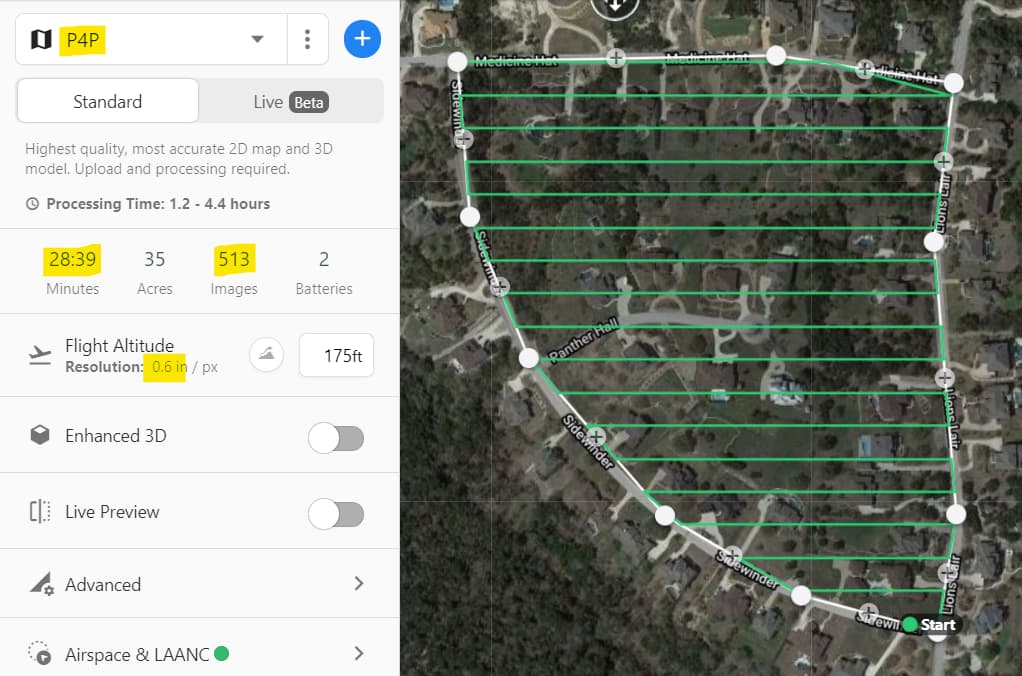 Something isn’t adding up there, the resolution should be better for the M2P at the same altitude as the P4P, from 175’ I would expect the M2P to be .5 in/px and the P4P to be .6 in/px.

I agree the P4P is preferred for mapping but the M2P can achieve the same resolution from a higher altitude which evens out the battery life a good bit. The P4P still takes the cake but it’s closer than that.

I was surprised when I did the comparison as well. I knew the P4P was more efficient but at the same AGL you are right. The biggest factor is the rolling shutter and the FOV that makes the M2P capture less area. That said you would actually have to fly higher to get the same efficiency.

Same parameters (85/65) but adjusted the last one to have the same resolution. 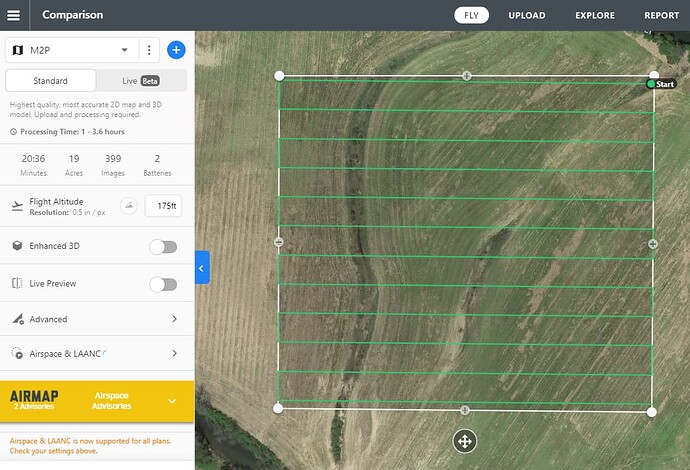 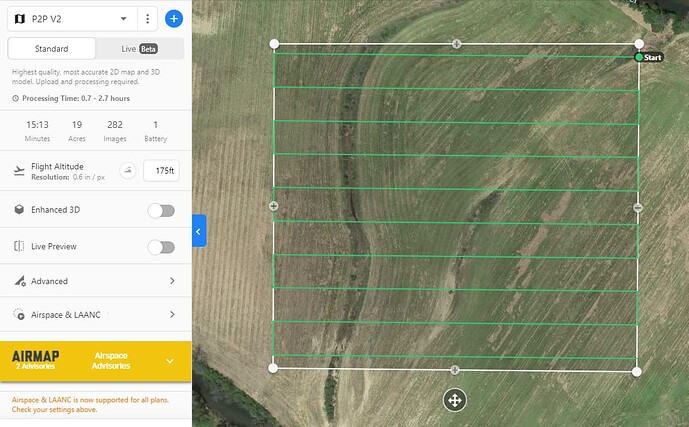 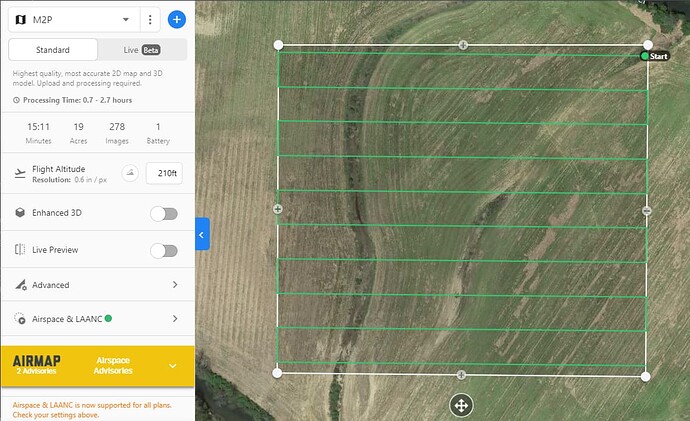 That’s more like it! Makes me a little nervous with our portal. I have been having issue with the linear flight planner the last couple of days so I am on a support ticket now.

Just got the response back that there is indeed a site-wide bug with the linear flight app.

Same parameters (85/65) but adjusted the last one to have the same resolution.

I know you’ve already said the P4P is a superior mapper. But I just wanted to add that you may get the same GSD by moving the camera farther away. However I suspect the detail is not identical and is better on the images captured by the P4P. But I have not tested this myself, so just a guess. Same time to capture, sure. Same quality, no.

So yes, the P4P ultimately is capable of producing a more accurate map. However, the sentiment that the M2P is terrible for mapping, needs 5 batteries, etc, etc, just isn’t true and the gap between them isn’t nearly as wide as it has been made out to be on this forum in my opinion.

Good points but there are a few things that we have experienced that may differ. I’ll reiterate what you said that in no way are Mavic maps bad and they would probably suffice for 75% of the mappers out there but there is a distinction when you are pushing for every centimeter you can get. In addition to what J mentioned we have noticed that,

All that said at the level that we want to map I don’t think the gap is plenty wide but obviously that depends on what you are willing to accept.

Maybe. Can you give me the settings for smooth cinematics?

The Mavic should have better resolution at the same altitude because of the increased focal length of 28mm and an FOV of 77 degrees whereas the P4P is at 24mm and 84 degrees. This is the major contributor to the better efficiency of the P4P.

I think the efficiency is the only place where we may not agree. Yes, if you fly both drones at the same altitude on the same map, the P4P will take less pictures and use less battery however the M2P will collect a whole lot more data. My opinion is if the goal is to objectively measure the efficiency, you have to account for the resolution and adjust the altitude of the M2P so that you are collecting the same amount of data. When that is accounted for the flight times are nearly identical. Granted we are relying on DD’s flight planner to measure resolution but i’m sure there is an equation that relates focal length to distance from object.

When you need 1.3x the battery and fly 2-3 multi-battery missions a day it is just not feasible to use a Mavic unless you want to carry around a crate which kind of defeats the point of the nice little package that everyone is in love with. We typically use 7-8 batteries per day per pilot and have two pilots so 15 vs 20. It’s actually worse when you slow down a Mavic like you should.

What speed do you typically fly the P4P at for mapping? We’ve seen pretty good results with both drones at 11 mph or less and >1/1000 shutter speed. I haven’t tried pushing the P4P beyond that but if you could fly it at 15/16 mph and get equivalent data to the M2P at 10/11 mph then it would definitely be more efficient.

I always let DroneDeploy configure everything and it seems 10-12mph is good for the P4P. What I do not like is that if I just need a quick map at 70-75% front DD makes it too slow. I would think 8 for the M2P. I see allot of people doing the stop and shoot method and that just wouldn’t be feasible for the size of sites we do. The Yuneec H520E RTK on auto tries to set itself to 22mph and it is “ok” if you have a fast card but it is an electronic shutter as well so I usually bring it down to 14mph. Difference is that you can control every aspect of the camera in flight which is something that DD needs to think about at least in the advanced menu.

Seems like this might be a lost cause for the MA2…It’s ridiculous that waypoint mapping worked with the MA1 and even the Spark and yet DJI has stubbornly excluded, or locked out rather, this capability in the MA2 firmware. I highly doubt DJI will unlock this capability over a year after releasing the MA2…why would they?

I guess DJI wants to force professional users to purchase a more expensive unit and thereby relegate the MA2 to the status of a prosumer toy for hobbyists, which is a shame.

I think they might have tested their Waters and then found out how much trouble the mapping solution providers were having with it across the board and figured out that the hardware platform was not really conducive to mapping. It’s still might happen as the models are not that old but like you I think that it’s probably slim to none. People seem to be having good success with drone link so I don’t know that there is necessarily a need for drone deploy to spend any more time on it. That’s if they have spent much time at all at this point.

The MA2 hardware isn’t the problem, from a hardware stand point it obviously must be adequate since the previous model was up to the task of flying waypoint missions. The issue is DJI decided to purposely exclude waypoints from the MA2 firmware (which they can obviously update anytime they want). I believe DJI made a decision to purposely hamstring the Mavic Air 2 solely to prevent cannibalizing Mavic Pro 2 sales. So if you want waypoints with DJI, from now on I think it’s going to be restricted to the Mavic Pro line and their enterprise class drones. I like having a small, ultra-portable drone that can actually function with Done deploy, so I’m not thrilled with DJI.

Drone deploy deciding not to implement virtual stick as a work around is what it is, they don’t have time to support every drone ever made and I understand that; hopefully more companies will continue to fill that void.

Here’s a list of flight controllers I found so far that can do virtual stick mapping missions with the MA2 (in order of least—>most expensive to try):

Thanks for sharing that list.
@DD, is there any update on and if your team is going to build the virtual stick support for the MA2 and MA2S?