I’m coming from DroneHarmony and I loved the ability to tell it to do either a single, double, triple, or quad pass/flight plan. It seems on here, I’d have to do each of those individually? Also, I don’t see any setting to adjust the angle of the camera/gimble for the flight. Am I missing something on that as well? Thanks in advance for the help!

I can understand single or double, but not sure what you mean when you add triple or quad. Are you talking about linear flight?

With DroneDeploy this is standard mapping nadir with one pass, crosshatch oblique with a 90 degree second pass. Defaulted pitch is 60 degrees. Then you have linear flight that is fixed nadir with 2-5 offset lanes.

The auto flight mode app from the market allows you to run custom pitch in a crosshatch pattern.

Interesting. Unless the structure has many faces at allot of different angles there shouldn’t be any reason to need that many flights. With DrineDeploy you have a master mission and can subsequently run several flights in a row. Personally if I am looking for a really good 3D reconstruction I run the crosshatch oblique and a nadir flight then pause the mission at the end and get a few manual shots of any areas that need the strange angles. It would also be simple to have one crosshatch, copy it and just rotate it and daisy-chain them. You can also add progress photos, videos and 360’s to the master mission.

Usually we work with very detailed buildings. So yes, quite a few faces lol And that was the point with DH. We could set it up for the “double” at a 90 degree pitch. This would give us our “preliminary” overview via the map/tiff/jpg it would produce. But we can also use those two passes with the diagonals at a 45 degree pitch. Between those two flights, we basically killed two birds with one stone. We then couple the drone data with ground scans from a FARO 350 scanner.

With DroneDeploy, it seems I would have to do 4 separate flights for every grid I fly?

Crosshatch nadir then crosshatch oblique? All running at different angles?

So you can setup 2 nadir flight plans perpendicular to each other and a 3rd for to crosshatch oblique. Start with whichever one you want and add the others to the queue. Or instead of the 2 nadir do one on the auto flight mode app crosshatch with a custom 90 degree pitch.

I’ll take a look at the settings more in-depth tomorrow. Thanks for your input Michael!

I ran a few grids in a county yesterday and I’m wondering if I missed something or just didn’t notice it in the settings. I didn’t see anything that allows me to change the angle/pitch of the camera to do an oblique image capture for a flight plan? Does this app/software only do nadir images and all you can adjust is the angle of the flight path?

For example, with Drone Harmony, Im able to specify a building. Trace it out, then say I want it shot at a 45 degree angle. Circling it, in a spiral from top to bottom. I don’t see that kind of detail/flexibility with DroneDeploy.

For example, with Drone Harmony, Im able to specify a building. Trace it out, then say I want it shot at a 45 degree angle. Circling it, in a spiral from top to bottom. I don’t see that kind of detail/flexibility with DroneDeploy.

Nothing like that in DD. Remember, you are comparing an app that is free to a fairly expensive one.

Like Dave said there’s no vertical spirals, but as far as the Auto Flight Mode crosshatch I mentioned before you can set the pitch manually. Also with the ability to daisy-chain you can derive so pretty complicated missions. It’s just the setup may not be as easy for some that emulate specialized functions other software may have. IE you can do something similar by daisy chaining several different progress photo missions together.

Ahhh that makes sense. I didn’t realize the app was completely free after my trial. Thanks again for the input guys!

but as far as the Auto Flight Mode crosshatch I mentioned before you can set the pitch manually.

This is what I’m missing. By manually, do you mean while the flight is launched/running I can rotate the camera up/down without affecting the automation?

No it’s a static set value. I also use it to do crosshatch nadir flights.

Then I’m definitely confused lol Where do I set that value? Im looking at a flight path now via the website dashboard and I’m not seeing anything that talks about the camera pitch, just the flight direction degree.

In the Auto Flight Modes app. 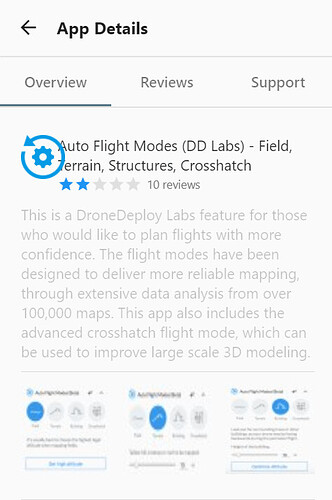 I’ve searched for “Auto Flight Modes” and “DD Labs” via Google Play Store and I’m not seeing anything. Is that an Apple app? Or an apk that I can sideload?

It’s in the DroneDeploy app market. Lots of interesting things in there. Click the 3-Bar at the top-left and go down to Apps. 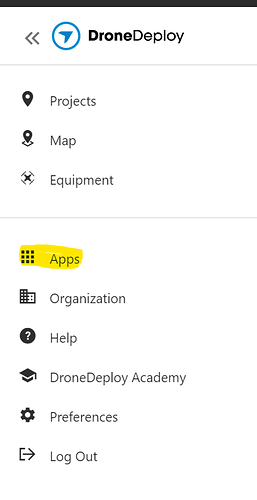 An overview of DroneDeploy's App Market, and how to get started with Apps.